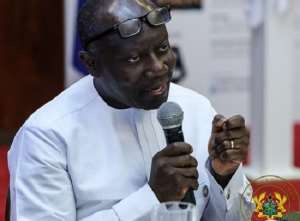 In a viral video, a certain Ghanaian laments rather purposelessly the insidious governmental footpath and trajectory left by Ghana's presidents. Especially, in this Fourth Republic. It has always been one political vampire after the other, he claims.

Downgraded twice within a space of six months, the Akufo Addo's government, he further laments, has been most regrettable and left very sour taste in the mouths of many citizens. His beef was simple: who shall take over from Akufo Addo, and what shall be the state of our economy if our previous presidents have always been better than the proceeding ones?

But methinks the answer is quite simple and not farfetched, logically: Ghanaians should repeat the heroes of today we mistook as vermin yesterday. Because if Akufo Addo is also going to be better than someone that he shall hand over to as president, that is, if we make a mistake and bring a new person, Ghana shall be turned upside-down, (anahG).

Instead, like Germany did in the World War One when it allowed General Hindenburg, a hero of the Battle of Tannenberg, to take over from General Erich von Falkenhayn who began the Battle of Verdun, Ghanaians should call back previous presidents to lead the country. And the only one legally qualified in that regard is former President Mahama.

Historically, one of the bloodiest battles during the World War One (WWI) was that of Verdun. A battle which gave birth to the famous phrase "The Big Push". A phrase His Excellency, President Mahama borrowed in the build-up to the 2020 general elections.

Verdun has been described by historians as one of the terrifying and most bloodletting battles in HUMAN history. It was between France and Germany. The latter developed what it called the Schlieffen Plan in order to fight two fronts in the war.

Unbeknownst to the French army about Germany's surprise attack through Belgium, launched Plan Seventeen into Germany territory. Then General Erich von Falkenhayn went ahead to besiege that fortress city of France, Verdun, and promise to make "France bleeds white".

Little did the Germans realize they were in a serious trouble until when General von Falkenhayn decided to call the attack off, and the French army blocked them from retreat. (In our local parlance we say "you have stepped on a soldier's foot": A big mistake and trouble.)

The French army commander, General Nivelles, instructed his men never to allow the Germans to retreat with the famous war chant by the French Army: "Ils ne passeront pas" (They shall not pass). The French won that battle with over 365,000 casualties.

How about the losers? The Germany's casualties were horrific, and General von Falkenhayn was sacked for Hindenburg.

Fellow Ghanaians, clearly, the managers of our economy in 2016 were simply the best vis-à-vis the current wishy-washy and namby-pamby economy. And for me, like the German troops who besieged Verdun at their own peril, President Akufo Addo shall serve as a palpable example to anyone who dreams of stealing a presidential election. Not only he has been embarrassed by the slide show of corruption scandals that continue to hit his government, his intellectual capabilities have been exposed as a man tied to the number three and the alphabet 'C'.

It's a crying shame and pity that despite the wallowing of the economy in shambles and tatters due to lack of empathic governance, some heartless individuals in the current government want to perpetuate their mess. Clearly, this is a celebration of corruption, impunity, and heartlessness.

In my humbly considered opinion, going forward, parliament of Ghana should have to enact a law to hold criminally responsible anyone caught talking about breaking "the eight" in this country. Personally, I purpose that such individuals must be hanged by the state!

These are national criminals and their demand to perpetuate such a gangsterism must be considered a crime against humanity.

As I see, the earlier President Akufo Addo resigns the better. He shall forever be remembered as the man who thought governance was simple but blundered and plundered his country's economy into a disaster. For Ghanaians shall forgive him and be grateful to him. At least, for being honest with his lack of wherewithal to run an economy. Otherwise he shall be remembered for taking Ghana's economy into relegation.

You see, after the Verdun bloodbath battle, the German General von Falkenhayn was sacked for "chewing more than he could swallow." The heroes of the battle of Tannenberg, General Hindenburg and his chief of staff, Ludendorf, took over from van Falkenhayn. Immediately.

That's why there's a shouting need for president Akufo Addo to go.

But you see, the Nigerian former President, Olusegun Obasanjo once said that "Nigeria is the only country where thieves are the first to go to court when caught red-handed". I think Nigeria can't claim monopoly of such smart and legal criminals. Even though such dastardly activities could manifest in a different way in other jurisdictions.

In Ghana, this is the tradition of the "Narcotics Peddlers Party", where some very empty-headed nonentities with negotiated certificates and academic pedigrees are quick to accuse others of what they themselves are literally quintessential representation and embodiment.

No wonder the Ghanaian economy has become so shambolic with every economic indicator suffering under a man who rode on the back of celebration of competence to the presidency. Make no mistake: don't get deceived by the flimsy excuses of Russian invasion and Covid-19. In the words of the country's "authentic" economic prophet, Dr. Bawumia, "how can global phenomenon skips all the surrounding countries and only attacks Ghana?".

Today, the Vice President agrees with himself that "you can't run economy with propaganda".

The recent ratings by Fitch Ratings and Standard and Poor's (S&P) Global Ratings that saw the Ghanaian economy downgraded and relegated to "CCC", speaks volumes of the competencies of those at the helm of affairs.

Without mincing words, it is a depiction of the academic degree of President Akufo Addo who obtained a Third Class Honors in economics.

Is it not mind-blowing that he is the first who never hesitates to accuse his opponents of incompetence? With Third Class (dis) Honors in Economics.

For me, the opposition in the Parliament House has been so charitable to the government for their prediction that the Ghanaian economy would soon hit D.

With inflation hitting 31% it's obvious we will descend and sink lower than the predicted D as jiffy as possible. And since there's no solution in sight to arresting and containing or controlling the same factors that have earned us the current grade, our economy shall get to even negative Z (-Z).

Today, the Importers and Exporters Union are threatening to increase prices of goods to 40%. Largely because of the free fall nature of the Ghanaian cedi and devaluation (inflation). A cedi we were told was locked up and keys handed to the IGP, has broken the jail and taken hostage of its jailers.

Today, to call the chairman of Economic Management Team, Dr. Bawumia, as the most sorely disappointed "economic prisoner" is understatement. Credibility of his technocracy as a technocrat has a big question mark on him. He has been caught up in the cobwebs of his own subterfuges and propaganda.

Aside factors such as "deterioration of Ghana's public finances, which has contributed to a prolonged lack of access to Eurobond markets"; tight external debt servicing, including amortization and interest; higher cost of domestic debts; peaking of inflation etc. the worst of them all is unfortunate institutionalization of corruption!

Retrieve stolen cash by the government back to the country and you would have the most prosperous and vibrant economy in the world. The disappearance of physical cash in this government is the sole cause of our present mess.

The twin evils of corruption and lack of qualification for the job, have contributed to our current state of affairs.

With competence, one gets to realize the implications of appropriating a certain cash and thereby avoids it. A government that practices corruption indiscriminately either lacks the understanding of governance or it’s simply heartless!

It's true that the President though not qualified enough to be part of the "men" himself, has assembled "real men". However, the men have been bogged down by his own unintellectual and corrupt approach to governance.

Largely due to corruption and the maniacal and illicit ambition to score cheap political points.

It it shameful that the government has put up a dogfight to resist the ratings. Earlier this year 2022 in February, the same agencies rated the economy down.

So, the wahala and naked suffering of the masses in the land, too, is not also true?

Indeed, it might not be true to our national tormentors because not only that they are isolated and insulated by proceeds of corruption, they lack the technical know-how to realize the true state of the economy.

Certainly, with unrestrained access to public funds and Third Class Honors Degree in Economics, you can't find out in order to appreciate a difficulty in an economy.