Auto manufacturing is changing: how South Africa can adjust to protect workers and jobs 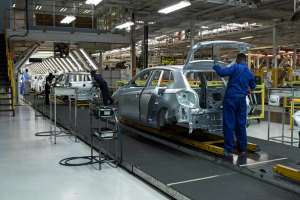 Technological changes in industry have given rise to contending schools of thought about their impact on work and workers. Automation is rapidly deepening and widening, reaching new areas of work. What's being produced is also changing. In the automotive manufacturing industry, for example, there is a global shift to vehicles that don't produce emissions.

The ongoing industrial revolution is defined by new work methods, ways of organising production, and advances in technology.

At the one extreme is the view that this is the end of work. This argues that the technological changes will lead to mass unemployment through retrenchments. At the other end are optimists who argue that the changes will increase overall employment. Disrupted jobs will be replaced by others.

Evidence from my research on the automotive global production networks in South Africa calls for a cautious approach anchored in sector specific realities.

After South Africa's first democratic elections in 1994, employers in the automotive assembly sector increased capital expenditure or investment in new production technology. They also reduced their direct employment by thousands of jobs. They benefited from trade and industrial policy incentives offered by the state.

Meanwhile, the number of jobs in automotive component manufacturing increased. This wasn't driven by new production technology but by increased demand for domestically produced components. Some of it was for export.

A key finding is that technology need not result in job losses if domestic production is high enough.

Evolution of the sector

The automotive manufacturing lead firms significantly increased their capital expenditure from R0.8 billion in 1995 to R9.2 billion in 2020. Much of this went into automation in the form of new production machinery and plant equipment, including an increased population of production robots.

In 1995, the automotive assembly sector directly employed 38,600 workers who produced 388,442 motor vehicles. Following the changes in production technology, work methods and ways of organising and co-ordinating production, the seven lead firms gradually reduced their direct workforce. This went down to 29,926 in 2020 .

The automotive component manufacturing sector increased its direct employment from 60,000 workers in 1995 to 80,000 in 2019 to support increased domestic motor vehicle production and export programmes.

This illustrates its employment creating potential, which needs to be harnessed in policy direction. It also shows that it will be beneficial to job creation to raise the levels of automotive vehicle assembly localisation substantially, and to deepen and diversify domestic component manufacturing value addition.

The National Union of Metalworkers of South Africa put this forward in 2021. It followed the union's rejection of a Green Paper on the advancement of new energy vehicles released by the Department of Trade, Industry and Competition.

This went against the imperative of employment creation as a key element of social upgrading.

In rejecting the paper, the metalworkers union stressed the importance of securing a just transition in automotive manufacturing. The transition in the sector involves a shift from carbon dioxide emitting internal combustion engine vehicles to new energy vehicles. These include hybrid, electric, fuel cell electric and hydrogen vehicles.

The union's action led to the department initiating a research-led inclusive consultative process on the transition to new energy vehicles.

A just, versus unjust, transition

It would be unjust for the transition in automotive manufacturing to occur without two ingredients. Firstly protecting existing employment. And secondly creating additional work to reduce unemployment. This is particularly true given that South Africa is ravaged by an unemployment crisis.

To achieve a just transition, it will be essential to localise and diversify domestic manufacturing value addition in new energy vehicle components. South Africa mustn't go back to colonial-type assembly of imported components and mustn't adopt strategies that can ruin employment creating opportunities in the components manufacturing sector.

The subject of workers' power is essential to giving this process a direction from labour's perspective. This is the focus the University of the Witwatersrand-based Southern Centre for Inequality Studies' Future of Work(ers) Research Group policy dialogue on “ Emerging forms of worker power in the digital economy ”.

Alex Mohubetswane Mashilo (PhD) is affiliated with the Southern Centre for Inequality Studies as a visiting researcher.