By Ammu KANNAMPILLY, with Nick PERRY in Kisumu and Simon VALMARY in Eldoret
Kenya 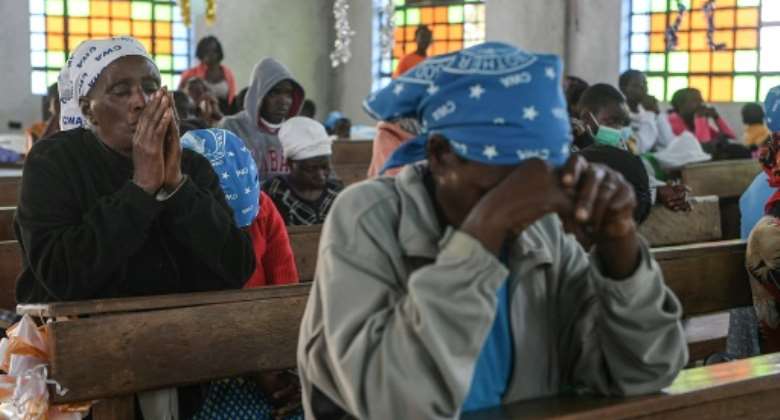 Many Kenyans hope that any disputes over the result are addressed peacefully through legal means. By Yasuyoshi CHIBA (AFP)

Kenyans prayed for peace Sunday as they waited anxiously for the final outcome of the presidential election, with the two frontrunners almost neck and neck, according to partial official results.

As of Sunday morning, Deputy President William Ruto was slightly ahead of his rival Raila Odinga, data from the Independent Electoral and Boundaries Commission (IEBC) showed, before cutting off the live feed displaying the percentage of votes won by both men.

The IEBC, which has now tallied votes from just over 60 percent of constituencies, did not give an explanation for the decision, but the Daily Nation newspaper said Ruto had scored 52.46 percent of the vote, while Odinga had 46.87 percent, citing official data.

Tuesday's vote passed off largely peacefully but after previous elections sparked deadly violence and rigging claims, the IEBC is under intense pressure to deliver a clean poll and release results by August 16.

Odinga (left) and Ruto are locked in a tight race for Kenya's presidency. By Simon MAINA (AFP/File)

Riot police were deployed overnight inside the commission's heavily-guarded tallying centre in the capital Nairobi after political party agents disrupted the process, hurling rigging allegations at each other.

"We call on all political candidates, their supporters and the public to exercise restraint. We must all avoid raising tensions that could easily trigger violence," the 14 organisations said.

The poll pitted Odinga, a veteran opposition leader now backed by the ruling party, against Ruto, who was widely expected to succeed President Uhuru Kenyatta until his boss joined hands with former foe Odinga in a dramatic shift of political allegiances.

'Let us have peace'

Both candidates have pledged to maintain calm, with the memory of the 2007-08 and 2017 post-poll violence still fresh for many Kenyans.

The election commission is under intense pressure to deliver a clean poll and release results by August 16. By Patrick Meinhardt (AFP)

At a church service in Nairobi on Sunday, Odinga, 77, recited the opening lines of the Peace Prayer of St Francis and said: "I want to become an instrument to bring peace, to heal, to unite and keep the hope alive in our country."

Worshippers in Odinga's stronghold of Kisumu also prayed for a peaceful outcome, with bishop Washington Ogonyo Ngede telling his 300-strong flock: "Don't let politics divide us. We must remain united."

"Because leaders come and go but the country of Kenya lives forever," said Ngede, a lifelong friend of the Odinga family.

"Let us have peace," he said to cheers and ululations.

In Ruto's Rift Valley bastion of Eldoret, the clergy and congregants alike called for calm and patience.

"We have come here to pray for peace, for our country, for our politicians to ask them (to) be very cautious and prudent in their utterances," said bishop Dominic Kimengich.

At church services across the country, congregants prayed for peace. By MARCO LONGARI (AFP)

"We have gone through this as Kenyans, we know that any imprudent remark... can easily trigger conflict and that's what we don't want," he told AFP.

"We want a peaceful Kenya."

Both candidates have pledged to maintain calm. By MARCO LONGARI (AFP)

The election is being closely watched by an international community that views Kenya as a pillar of stability in a volatile region.

Turnout was about 65 percent, much lower than the 78 percent recorded in 2017, a reflection, some observers say, of the disenchantment with the political elite, particularly among young people.

The winner of the presidential race needs to secure 50 percent plus one vote and at least a quarter of the votes in 24 of Kenya's 47 counties.

If not, the country will be forced to hold a runoff within 30 days of the original vote.

Observers say that with the race so close, an appeal to the Supreme Court by the losing candidate is almost certain, meaning it could be many weeks before a new president takes office.

Where are DISECs in this whole galamsey brouhaha – Otumfuo q...
32 minutes ago

Akufo-Addo announces plan to establish Tourism and hospitali...
32 minutes ago