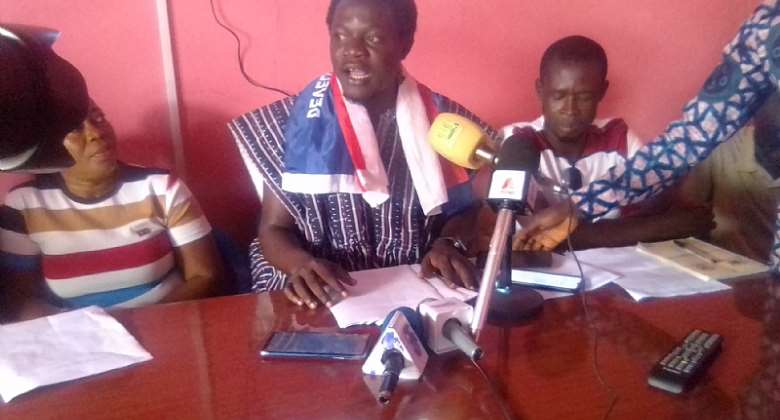 Tension is brewing between Agona East NPP as polling station and constituency executives engage in accusations against each other in the constituency over plots to remove the District Chief Executive of the area.

The situation has led to counter press conferences, demonstrations and petitions.

At a press conference held at Agona Kwanyarko recently, the polling station executives disassociated themselves from an earlier petition by a group calling itself Polling Station Executives.

According to their spokesperson, Nana Yaw, the said petition by the fake group seeking the removal of the DCE for Agona East Hon Janet Odei Paintsil had no basis.

"We the Polling Station Executives of the Agona East Constituency are by this press conference state categorically that we have not been informed or notified of such needless picketing at the party office at Agona Duakwa to present a petition for the removal of the DCE.

"We (the Polling Station Executives) want to indicate to the party leadership at the Regional and the National level that the people who engaged in what we refer as an illegal and calculated attempt by hooligans, mischievous, miscreants and unpatriotic citizens who have no shred of empathy, unity and desire for the party and country to maintain peace and protect the ongoing development in Agona East Constituency.

"It is only a master plan of some persons in authority in the Agona East Constituency to kick the DCE out of office other than wrestling the Parliamentary seat from the NDC.

"These faceless people we believe were orchestrated by the Constituency Executives and pushed it to the valandar boys to execute the plan to taint the image of the party and the District Chief Executive.

"We therefore call on the general public, party leadership and true Patriots to ignore these shameful, needless, falsehood, attention-seeking demonstrators and focus on the agenda of His Excellency President Akufo Addo to develop Agona East and Ghana as a whole," he stated.

In a related development, the Agona East Constituency Chairperson, Madam Hannah Asamoah rubbished the said accusations against the Constituency Executives.

According to the Chairperson, the Constituency Executives had no hands in whatever transpired in the demonstration or petition for the removal of the DCE.

"Everyone in the Constituency has the right to express his or her concern bothering him or her, so I believe those people were expressing their frustrations with the system, so they chose to channel it through Constituency Executives to Regional and National Executives to be addressed," the Chairperson noted.