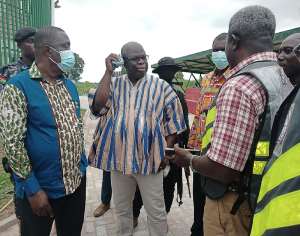 The minister first visited the site for the proposed regional office for the Department of Food and Agriculture at Patuda where he saw at first-hand, work on a one-storey office block and a two-unit 3-bedroom semi-detached residential accommodation for staff of the directorate.

Briefing the regional minister and his entourage which included the Atebubu-Amantin municipal chief executive Hon. Edward Owusu, the consultant to the project Mr. Edward Agyeman of the Architectural and Engineering Services Limited put the completion rate for the office block at 95% and that of the residential facilities at 87% promising that all would be completed within two weeks.

The minister on his part expressed satisfaction with the level of work adding that the location of the office is a recognition of the contribution of the Atebubu-Amantin municipality to food security in the country.

He said the new facilities will also motivate the staff to put in their best for the development of agriculture in the region and the country as a whole.

Hon. Kwasi Adu-Gyan later inspected a completed office complex earmarked for both a circuit and high courts in Atebubu.