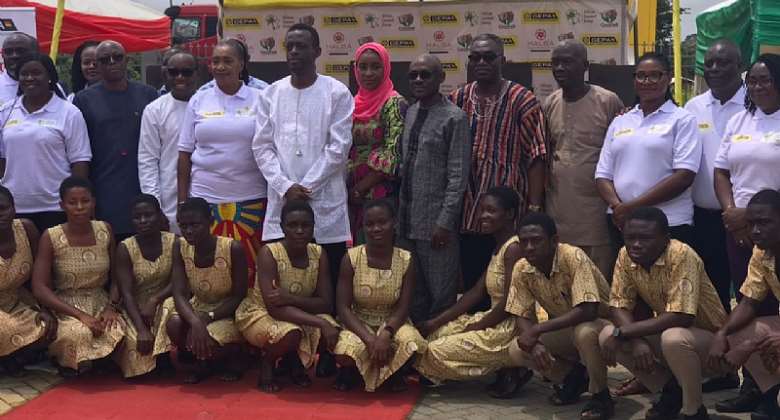 The second edition of the International Coconut Festival has been launched at Ellembele in the Western region of Ghana under the theme: “Repositioning Ghana’s Coconut Sector for Accelerated Industrialization”.

The Coconut Festival, which is a collaboration effort between the Ghana Export Promotion Authority (GEPA) and the African Coconut Group aims to quicken the pace of the development of the coconut industry as a whole with emphasis on value addition. The festival also seeks to connect and serve the Ghanaian community and other international participants through the development and promotion of coconut.

This year’s event would be marked with activities including exhibitions of high and low level technologies in the coconut industry, business seminars, financial support platforms, networking, talks, field visits, senior high and university level competition, colloquiums and others.

The Chief Executive Officer for Ghana Export Promotion Authority, Dr Asabea Asare, delivering her remarks at the launch expressed her excitement over the partnership between GEPA and the African Coconut Group which has revived the ailing coconut industry and is now gaining ground steadily. It has the potential to position Ghana as the destination for coconut on the continent.

According to her, the revitalization of the coconut industry was intended to emphasize Government’s industrialization agenda and to push forward the One-District-One-Factory initiative by encouraging more companies to set up coconut processing factories in the districts.

In order to make Ghana a leading global supplier of coconut and generate significant export revenue for the country, Dr Asabea Asare indicated that some deliberate policies were rolled out to achieve the needed results.

“GEPA has made modest but quite significant investments in the sector since 2017 by procuring and distributing disease-tolerant coconut seedlings to coconut farmers across the major coconut farming Regions in the country. So far, we have distributed close to seven hundred thousand seedlings covering some eleven thousand two hundred acres. We are not relenting on our efforts until we get to the point where the industry is mature and can be on its own,” he said.

The CEO applauded the roles played by other stakeholders to make Ghana the final destination for Coconut on the continent.

“We equally recognize the fact that the Ministries of Food and Agriculture and Local Government and Rural Development have also invested significantly in the sector through the Planting for Export and Rural Development (PERD) Programme. Of course, we are not oblivious of the central role that the African Coconut Group, led by Mr. Davies Korboe and his able colleagues have played in advocating strongly for the development of the sector to boost export revenues.

"We also applaud Government for the establishment of the Tree Crops Development Authority (TCDA) which GEPA and other stakeholders had strongly advocated for. We believe that the Authority’s mandate and activities would inure to the benefit of the sector, coconut being one of the key tree crops under the Authority. We are happy to say that our two institutions have been collaborating well on various issues, and on the occasion of this launch, call for greater inter-institutional cooperation to quicken the pace of the sector’s development,” she said.

She reiterated GEPA’s commitment to the coconut industry and has encouraged local and foreign investors and SMEs looking to upscale their activities to be on the lookout for an extended range of innovative coconut products in cosmetics, food and beverages, medication, grooming products as well as art & crafts.

On his part, Chairman of the African Coconut Group, Mr. Davies Korboe, said the theme for this year’s event is in response to the growing need to diversify Ghana's traditional export trade through aggressive supply of coconut to meet the shortfalls in trade and export balances.

To promote the production and export of coconut, according to him, the African Coconut Group will continue to collaborate more closely with all actors in the coconut industry to stimulate trade and investment in the agri-food sector in Ghana in order to improve productivity and value and job creation, and strengthen the existing structures to support value addition and push for more exports in order to realize more foreign exchange earnings.

Other key personalities present at the launch were Hon. Kobina Okyere-Darko, Western Regional Minister, the MCE for Ellembele, Chiefs and other stakeholders in the coconut value chain.