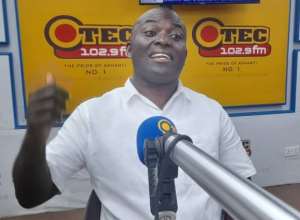 A former Ashanti NPP chairman aspirant, Chairman Odeneho Kwaku Appiah, popularly known as COKA has said rallying members of the party together was the only way to 'break the 8.'

According to the former Ashanti Regional Dean of Chairmen, 'breaking the 8' should not be only a mouth talk but action.

Speaking in an interview on Otec FM's afternoon political talk show dubbed ‘Dwaberem’ on Friday August 12, 2022, Chairman COKA noted that most people think they must be given positions or appointments in the party before they can work for the party’s victory.

"I want all members of our great party to fulfill their core membership duties of protecting the NPP to make it attractive for others to join and maximize their chances of winning the 2024 elections’’, he told the programme’s host, Prince Nii Ade (Dr. Cash)

Chairman Odeneho Kwaku Appiah however pledged his commitment to do whatever possible within his powers to ensure the party 'breaks the 8'.

He called on the party to form a strong force and united front to face the opposition parties, especially the NDC as Ghanaians will never forgive them if they fail to win the 2024 elections.