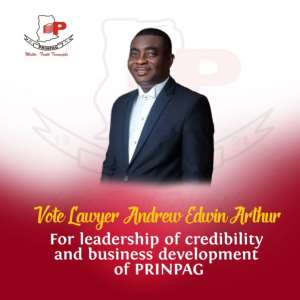 Managing Editor of the New Independent, Lawyer Andrew Edwin Arthur has been re-elected as the President of the Private Newspaper Publishers Association of Ghana (PRINPAG).

The seasoned journalist won in an election held on Friday, August 12.

He pulled 32 votes to beat his competitor, Mr. David Tamakloe, Managing Editor of Whatsupnewsghana.com who had 18 votes.

“The Elections Committee of the Private Newspaper Publishers Association of Ghana (PRINPAG) has declared LAWYER ANDREW EDWIN ARTHUR Publisher of the New Independent and Incumbent President as the winner of the Presidential Elections held by the Association in Accra on Friday, August 12, 2022,” part of a statement from PRINPAG has said after the election.

Declaring the results, the Chairman of the Elections Committee, Mr. Ben Assorow announced that all unopposed candidates had a YES Vote of 94% with 6% NO Votes.

They were Mr. Michael Antwi-Agyei who won the position of Vice-President; Mr. Emmanuel Opare-Djan who was retained unopposed as National Organiser; whilst Mr. Jeorge Wilson Kingson was elected to the newly-created position of Public Affairs Officer.

Speaking after the polls, the Chairman of the Elections Committee Mr. Ben Assorow warmly commended the PRINPAG members for their 100% turn out which is an inspiration to the incoming Executives.

He disclosed that the incoming executives shall appoint an Acting Treasurer till nomination is open for an election to elect a substantive Treasurer.

The losing Candidate, Mr. David Tamakloe assured PRINPAG members of his support and readiness to represent the Association at any level.

The President-elect, Mr. Edwin Arthur thanked all members for their enthusiasm and overwhelming support at the polls. He reiterated his commitment to the development of the Association and assured that he will continue the PRINPAG AGENDA of “Re-organization, Re-branding and Re-tooling” of the Association.

The Swearing-in of the newly-elected Executives comes on by the close of August.