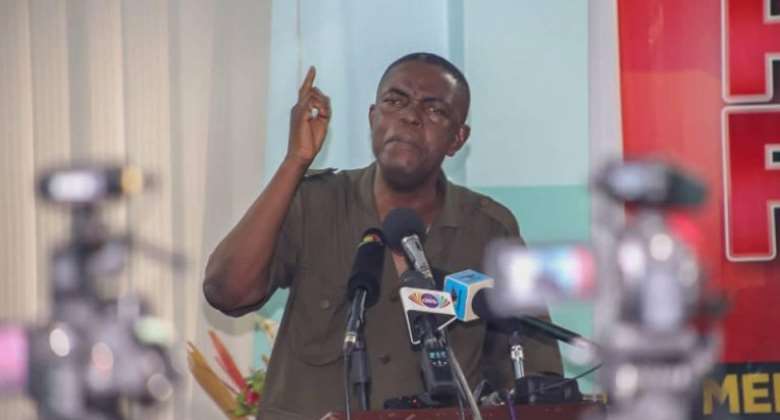 In the widely circulated WhatsApp videoclip titled “Facts from Lies: Nkrumah Never Dies,” which has been making the propagandistic rounds for quite sometime now, Mr. Kwesi Pratt, Jr., lays the farcical and scandalous claim that Dr. J B Danquah, the immortalized Doyen of Gold Coast and Modern Ghanaian Politics, was just a “Regional Chairman” of the United Gold Coast Convention (UGCC), the first formidable and massive organization and movement of the Ghanaian citizenry in the anticolonial liberation struggle.

In reality, the foremost legal light, wit and ideological and intellectual bulwark behind the UGCC was the Founding Vice-President of the latter landmark establishment, just as Dr. Danquah had also been the Founding President of the London-based West African Students’ Union (WASU), nearly a generation before the arrival of the future Prime Minister and President Kwame Nkrumah from the United States of America, where he had undertaken his graduate studies, and the assumption of the latter of the Presidency, some reliable historical records even claim the Vice-Presidency, of the West African Students’ Union.

Yes, Dr. Danquah was the Vice-President of the United Gold Coast Convention, while Mr. Alfred George “Paa” Grant, the main financial underwriter of this seminal institutional establishment, was named the substantive President of the UGCC. We must also quickly point out that it was in Mr. Grant’s Sekondi-Takoradi office that the UGCC was founded. As well, his Presidency of the UGCC was decidedly the functional equivalent of the movement’s Honorary President, in much the same way that Chief Justice Edward Akufo-Addo, the father of Ghana’s current President, Nana Addo Dankwa Akufo-Addo, would be named Ceremonial President of Ghana in the Westminster-fashioned government of Prime Minister Kofi Abrefa Busia.

In other words, functionally or practically speaking, Dr. Danquah was the de facto Founding-President of the United Gold Coast Convention, the coinage of whose name Dr. Danquah notes elsewhere in his quite considerable corpus of writings, had been authored by his nephew Mr. William “Paa Willie” Ofori-Atta. Of course, Nkrumah would strategically “plagiarize” the “Convention” in the name of the United Gold Coast Convention to create his Convention People’s Party (CPP) as a means of railroading his political mentors and patrons, thereby positioning himself as the Fountainhead of Modern Ghana’s vigorous march towards the reassertion of her sovereignty from British colonial imperialism. He would deceive the largely illiterate and semiliterate members and supporters of the UGCC that the latter seminal political establishment had been renamed the Convention People’s Party. Nkrumah would succeed in scamming unsuspecting members and supporters of the UGCC largely because he was the best known among the leadership and executive operatives of the UGCC, of which he had been invited from sojourn in the British capital, in the waning weeks of 1947, to serve as the General-Secretary, a position that gave him the opportunity to travel extensively around the country on membership recruitment drives.

In reality, Danquah would function as the de facto President of the United Gold Coast Convention because Paa Grant, the nationally renowned and well-heeled Sekondi-Takoradi timber merchant, was rather much too old to effectively function as the institutional Head or President of the UGCC, being roughly about 16 or 17 years older than Dr. Danquah, or about the same number of years that separated Dr. Danquah from the future President Nkrumah. It is this indelible and immutable truth which the editor-publisher of the so-called Insight newspaper finds so extremely difficult to swallow, thus Mr. Pratt’s all too predictable apocryphal claim that Dr. Danquah was “merely” one of the several regional chairmen of the United Gold Coast Convention.

We must also promptly and emphatically point out the fact that the proposal of the possible names to be given an Independent Democratic and Sovereign Republic of Ghana, for which Mr. Pratt viciously and mischievously claims Dr. Danquah to have suggested “Akanland,” actually “Akanaland,” was only one of about a half-dozen names that the putative Architect of Modern Ghana had proposed, including, of course, the very name of “Ghana,” which the Kyebi-Adadientem native had also proposed because Danquah was scholastically and authoritatively convinced, through his extensive studies and research on West African History, that a sizeable percentage of present-day Ghanaian citizens and residents may very well have immigrated from the geographical location of Ancient Ghana, or somewhere within the vicinity of present-day Senegal, Mauritania and Southern Algeria.

It was indisputably Dr. Danquah, and not the then Prime Minister Kwame Nkrumah, contrary to what Mr. Pratt would have young and unsuspecting Ghanaians believe, who vigorously and vehemently campaigned for the name “Ghana” to be placed on the ballot of the 1956 Referendum that led to the renaming of the erstwhile Gold Coast Colony as Ghana on March 6, 1957. In short, anybody who proudly identifies himself or herself as a Ghanaian citizen is a prime beneficiary of the erudite and distinguished scholarship of Daasebre, The Akyem-Abuakwa Twafohene, Nana Kwame Kyeretwie Boakye-Danquah, I. Which, of course is not in any way to ignobly dim the significant lights of the contributions of the other major seminal co-architects in the seminal building and the shaping of the Modern Ghanaian State, among whose ranks could aptly be listed the name of President Nkrumah, because the real or authentic narrative of Ghana’s Independence Struggle and the country’s creation and early development cannot be told in any remarkable or significant manner without a recognition of the phenomenal achievements and contributions of the Honorary Doctor Kwame Nkrumah.

Else, such apocryphal and patently false narrative will not and cannot take us through the watershed moment of the climaxing of Ghana’s reassertion of her sovereignty from British colonial imperialism on March 6, 1957. It is equally true that President Nkrumah, more than any other African leader of his generation and the generation immediately before him, fiercely campaigned for the grand and the ultimate unification of all Continental Africans and the ultimate realization of the organic and wholesome integrity of the proverbial African Personality among the comity of the global congregation of humanity. But far from what the ideologically quixotic and the fanatical likes of Mr. Pratt would have the rest of us believe, it was not primarily because lambent-witted leaders like Dr. Danquah were any less visionary than the legendary African Show Boy.

Rather, it was obviously and inescapably because the practical realities on the ground had simply not permitted the far more experienced and pragmatic leadership of Danquah’s caliber and intellectual depth and temperament to wastefully spend their nation’s time and scarce resources in shadow-boxing the merciless and wantonly destructive headwinds of abject ignorance and virtual political and ideological chaos in such temporally unwinnable battle. The admittedly fecund political terrain needed far more delicate and diplomatic tending and preparation for the ultimate implementation of such an epic venture than sheer rhetoric, however poetic or florid such wishful projection might have seemed.