By Hillary ORINDE and Anne-Sophie LABADIE, with Nick PERRY in Kisumu
Kenya 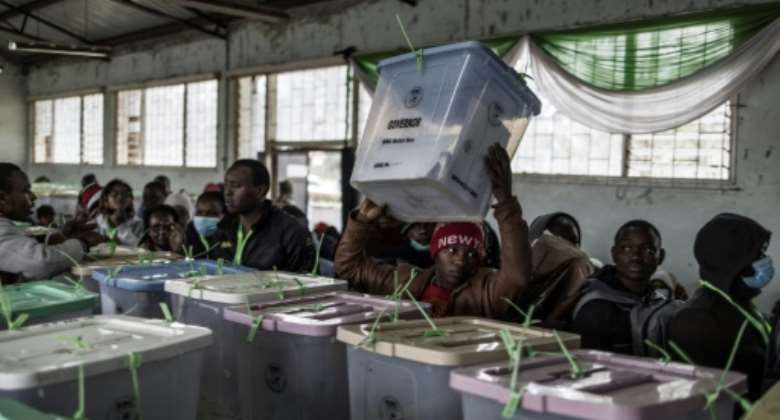 The election commission is under pressure to deliver a clean vote and release the results by August 16. By MARCO LONGARI (AFP)

The head of Kenya's election commission on Friday admitted the tallying of results from the country's presidential poll was moving too slowly, blaming political parties for the delay, as national broadcasters abruptly stopped sharing provisional outcomes.

Tuesday's election was largely peaceful but disputes over previous presidential votes have been followed by deadly violence, fuelling jitters as provisional results point to a tight race between frontrunners William Ruto and Raila Odinga.

After the Supreme Court annulled the 2017 presidential poll, citing irregularities and mismanagement by the Independent Electoral and Boundaries Commission, the election watchdog is under pressure to deliver a clean vote and release the results by August 16.

But the complex process of verifying and tallying votes is now in its fourth day, with IEBC chairman Wafula Chebukati accusing political party agents of delaying the exercise by haranguing election workers with unnecessary questions.

"We have observed that we are not moving as fast as we should. This exercise needs to be concluded as soon as possible," Chebukati said.

Tuesday's election was largely peaceful but disputes over previous presidential votes have been followed by deadly violence. By MARCO LONGARI (AFP)

"The agents in this exercise cannot proceed in the manner in which we are proceeding as if we are doing a forensic audit.

"Please don't interrogate the... officers and slow down the process. If we do that, we will not be able to finish this exercise," he warned.

The IEBC, in a bid to be transparent, has uploaded forms to its website showing the results from each polling station, enabling Kenyan TV channels to work out their tallies.

But the broadcasters suddenly stopped their tallies on Thursday, with around a million votes left to go. They provided no explanation for the halt.

Chebukati has urged Kenyans not to worry about the different outcomes projected by various TV channels, saying the IEBC would release the results as soon as possible.

'A lot of anxiety'

But with the wait likely stretching into the weekend, some Kenyans said they were increasingly anxious to know who the country's next leader would be.

Some Kenyans said they were keen to move on from the vote and resume normal life. By Simon MAINA (AFP)

"We pray they announce, the earlier the better," Jael Akinyi, a retired librarian, told AFP on a busy street corner in Odinga's bastion of Kisumu.

Christopher Mesa, a pastor at the Africa Gospel Church in the lakeside city, said there was "a lot of anxiety about the results" among his congregation, and the conflicting results on television only served to confuse people.

"By not showing the results, it calms the people. That was bringing emotions up and down," he said.

"We would rather it takes time but it is clear. The delay is not a problem," he told AFP.

International observers, including from the United States, the European Union and the African Union, have hailed the IEBC for improving its procedures compared to earlier polls.

But turnout was lower than that seen in previous elections and some Kenyans said they were keen to move on from the vote and resume normal life.

"I don't care (for) the ongoing counting for the presidential (election), it makes people anxious," Peter Kamau, a 42-year-old taxi driver, told AFP.

"We want to go back to daily life."

No presidential poll outcome has gone uncontested in Kenya since 2002, and the disputes have led to bloodshed in the past, either involving ethnic clashes or police violence.

Social media is already swamped with disinformation about the results, with rights campaigners and civil society groups accusing both candidates' camps of sharing misleading posts.

Kenyans voted in six elections on Tuesday, choosing a new president as well as senators, governors, lawmakers, women representatives and some 1,500 county officials.