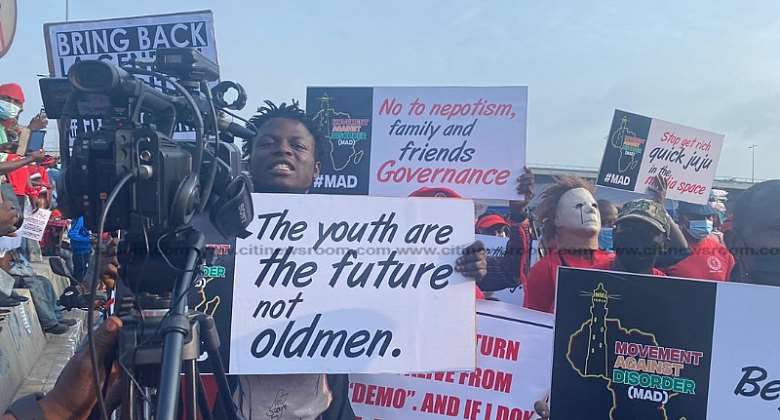 YOUTH LEADERS will need to do more than protest to create permanent change, as evidenced by a recent march that crossed conventional ethnic and political divides. Young Ghanaians have been protesting bad governance under the hashtag #FixTheCountry since the beginning of May. The campaign was started on Twitter by social media personality Joshua Boye-Doe (a.k.a. Kalyjay) in response to rising fuel costs as a result of one of the many tax hikes. The #FixTheCountry protests might have fizzled out after a short time (public outcries in Ghana are rarely sustained) if not for the insensitive and combative posture of government supporters, who retorted with #FixYourself and #FixYourAttitude, inflaming protesters, drawing attention and support to their cause, and precipitating calls for demonstrations.

Such an outburst of youth activism is unusual for Ghana and hasn't been witnessed in recent times. Although Ghana is regularly praised for its stable democracy—particularly because of its largely free media and relatively peaceful elections and transfers of power—citizens hardly demonstrate, preferring instead to voice their frustrations among themselves or over the airwaves and social media. Many Ghanaians do not believe they can bring about change by putting pressure on political leaders. Many others feel disinclined to and instead direct their energy toward finding their own solutions to the myriad economic and societal problems that characterize life in a developing country like Ghana. The 2019 Afrobarometer Round 8 Survey revealed that during the previous year, 85 percent of respondents never contacted a member of parliament about an important problem or to share their views while 71 percent never contacted an assembly member. Instead, most Ghanaians typically wait until election time to punish politicians at the polls. Recent election results are telling in this regard.

Former Ghanaian President John Mahama of the main opposition National Democratic Congress (NDC) was voted out of office in 2016 following public disaffection over widespread corruption among party officials, economic mismanagement, and a debilitating power crisis that plagued the country for much of his term. The incumbent president, Nana Akufo-Addo of the New Patriotic Party (NPP), narrowly won a second term in the December 2020 elections, which saw a voter turnout of 79 percent.

Akufo-Addo had been widely accused of constituting a “family and friends” government, made up of 126 ministers—the largest government in Ghana's history. In 2016, he campaigned on a promise to root out corruption, so Ghanaians were angered by the scandals that ensued under his watch, including him forcing Daniel Domelevo, the erstwhile auditor-general, out of office over his investigation of a payment the Ministry of Finance made to a British company. He also incurred the wrath of employees and depositors at the many financial institutions shuttered under his administration's financial sector clean-up exercise due to their poor regulation, insolvency, and fraudulent activities.

NPP members of parliament were also punished for poor performance. Ghanaians measure their politicians' performances through the development projects they carry out in their constituencies. The NPP lost their 63-seat majority in the 275-seat unicameral parliament. The party now holds 137 seats and forms a slim majority with an independent member of Parliament. #FixTheCountry protesters—now a full-fledged movement—have denounced both parties for their failings and declared the group to be nonpartisan. The movement has drawn together a throng of youth who, until now, have been seething on the sidelines, disillusioned by a system that has rendered them second-class citizens and left them facing a precarious future. Their grievances include high unemployment and underemployment as well as a high cost of living.

Only 10 percent of university graduates find employment a year after graduating, and it can take up to 10 years for a large number of graduates to secure employment, according to the Institute of Statistical, Social, and Economic Research at the University of Ghana. Many graduates end up doing menial jobs. The situation has deteriorated to the extent that male employers and recruiters commonly proposition young female jobseekers as a precondition for employment.

The government has introduced entrepreneurship and skills training programs to equip the youth with technical and financial support and enable them to tap into opportunities in priority sectors like agriculture and manufacturing. However, with 70 percent of Ghana's population of 31.8 million people under the age of 35, just a minute proportion of unemployed youth partake in and benefit from such programs.

Ghana's capital city, Accra, ranks as the 87th most expensive city globally and the 13th most expensive city in Africa, according to Mercer's 2021 Cost of Living City Ranking index. The costs of real estate and rent are particularly prohibitive for young Ghanaians. Real estate within parts of Accra costs as much as, or more than, real estate in developed countries—mainly because of high construction costs (finishing materials are imported, and construction is supervised by expatriate firms, which charge more than locals firms do), and their popularity as investment properties to rent to expats.

Landlords also request rent advances of up to two years from tenants. A lot of young Ghanaians therefore live on the outskirts of Accra or in neighboring regions where housing and rent are cheaper; during rush hour, they spend as much as two hours driving home from their workplaces in the city.

The NPP made a campaign promise to introduce a rental loan scheme for eligible workers in formal employment. The scheme will be introduced this year, but this intervention will leave out a large segment of the youth who are unemployed or in informal employment. The scheme is also an inadequate solution because it does not tackle the root of the problem: landlords breaching the national rental law by charging more than the maximum allowed rent advance of six months.

Protesters have also been tweeting against general poor living conditions, such as bad roads, substandard health care, erratic supply of water and power, and the lack of social amenities in rural parts of the country. #FixTheCountry is, in essence, a fight for decent living conditions for all Ghanaians.

In addition, the hashtag is a forum for protesters to react to and lambast government policies and actions, such as the recent assault of a journalist by national security operatives for unlawfully filming abandoned state-owned vehicles at the Ministry of National Security, the government's incessant borrowing from domestic and external sources, and the official approval of salaries for the country's first and second ladies.