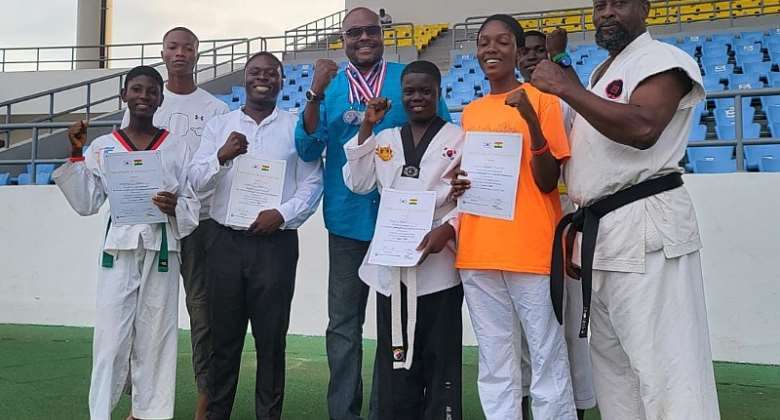 "My visit here is to welcome you back from the competition and to acquaint myself with what happened in Accra. It gladdens my heart the little support I gave you guys has won some medals for the region," he stated.

He continued by urging the association to train harder to win more medals and also possibly be crowned as the nations best Taekwando team come next competition.

"I was humbled to be decorated with these wonderful medals of yours but at the same time I have to give it back to our gallant athletes who made the region proud", an elated Dr. Nyarku shared with the Taekwando team.

He made these remarks when he paid a courtesy call on the Central Region Taekwando Association at the Cape Coast Sports Stadium on Wednesday, 10th August,2022.

Welcoming the Cape Coast North Member of Parliament to the Cape Coast Sports Stadium, Mr. Benard Ampem Darko, Coach of the Taekwando team of Central Region narrated, "When we were about travelling to Tema for the competition, we approached the MP for some financial support to enable us embark on the journey for which he did. Today too, he has equally given us some funds to celebrate the occasion."

According to him, it was only wise, proper and fitting that once Dr. Minta Nyarku assisted them, they had to present to him the medals won at the competition. "We won 19 medals and he was elated at our achievements and promised to offer us any assistance anytime such a need would arise to contribute to making central region Taekwando one of the best".

The Central Region Taekwando coach added that they were pleased with the Cape Coast North Member for his kind gesture because "Not all people would be willing to support Taekwando Association and I know God would bless him for his goods works and people would appreciate what he has done and vote for him again."

Out of 16 Regions which participated in the competition, Central Region placed fourth beaten by Accra 1st, followed by Eastern Region 2nd and Volta Region came 3rd.