By John MKHIZE with Claire DOYEN in Mqanduli
South Africa 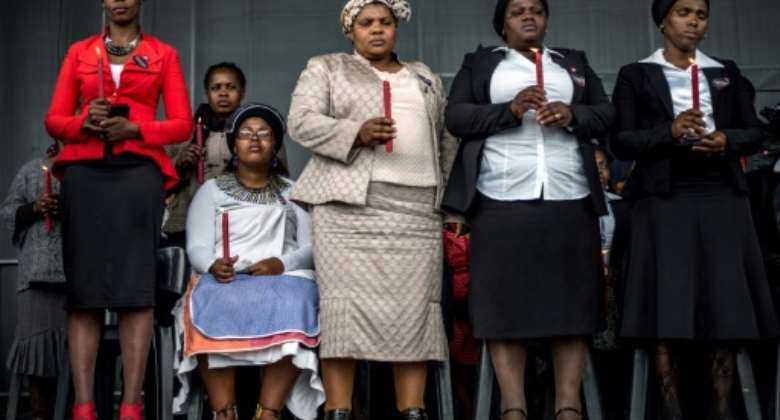 Bereaved family members at a memorial service, two years after the shootings in Marikana. By Marco LONGARI (AFP/File)

A decade after her 30-year-old brother was killed when South African police opened fire on miners striking for better wages, Nolufefe Noki is still no closer to obtaining justice.

Mgcineni 'Mambush' Noki had become the face of the 2012 protests at the Marikana platinum mine northwest of Johannesburg, known as the "the man with the green blanket".

Leading from the front, he addressed thousands of fellow mineworkers with a commanding raised fist, a green blanket wrapped around his shoulders until the day he was struck dead.

The shootings, which killed 34 people in total and wounded 78 more on August 16, 2012, were the bloodiest police crackdown since the end of apartheid in 1994.

Workers at the platinum mine were demanding better wages. By STRINGER (AFP/File)

But Noki's sister says she is still waiting for answers as to what exactly occurred that day.

"We don't know what happened," the 42-year-old said, speaking inside the family home in Mqanduli, a village in the south of the country.

All she knows is that the police arrived to break up the wildcat protest on a hill, and then "many people were killed".

Television footage that day of police opening fire on protestors, raising a crest of dust at the foot of the hill, shocked South Africa and the world.

An official inquiry blamed the deaths and injuries on police "tactics", recommending that those responsible be investigated and prosecuted.

But a decade on, the Independent Police Investigative Directorate, a police watchdog, said the case was "still under investigation".

The country's solicitor general, Fhedzisani Pandelani, said only around half of all claims made for compensation have been paid out.

"It's regrettable that we sit here and discuss things that happened 10 years ago," he said.

For survivors and the families of victims, the memories are still agonisingly fresh.

When Noki's remains were returned home, 1,000 kilometres (600 miles) away in the south of the country, his sister says she was unable to properly say goodbye.

"I was told I couldn't see him, because he was too badly hurt," she said in Mqanduli, where green hills stretch as far as the eye can see.

Many of the workers in South Africa's platinum mines come from remote parts of the country such as Mqanduli, only returning home for the Christmas holidays.

Noki was buried on a nearby hill, where his grave is now overgrown with grass.

But his family is still too traumatised to pay their respects at the burial site.

He secured a pay increase, and today lives in a single room provided by his employer in a township near the hill where the miners were shot.

"The government doesn't care about us," Magidiwana said.

"It's 10 years now, our lives would have long changed for the better. Instead, our lives have become worse."

Tensions had been brewing for days before the shootings at the Marikana mine.

Strikers were unhappy with their representation, as two separate unions vied to take centre stage, and workers who didn't join the strike had been harassed.

Ten people had already died since the start of the protest.

Mourners gather in Marikana on August 23, 2012, to remember those killed during the strike. By - (AFP/File)

As part of reparations, the 49-year-old mother of two boys was offered a job at the mine, but she says that isn't enough.

"Me and my kids want to see justice," she said.

She says she still does not know who killed her husband, and fears that they could be working alongside her.

She is also yet to receive any compensation.

President Cyril Ramaphosa, a non-executive director of the mine at the time, was exonerated of any wrongdoing in the killings, after he called for a crackdown on the strikers.

On May Day this year, he was forced to abandon a rally speech and bundled into an armoured police vehicle, after miners shouted him down in Rustenburg, a large town near Marikana.

"There hasn't been justice," he said.

The community in "Marikana is still traumatised".

Onkgopotse JJ Tabane, a political commentator, at a memorial speech this week said the Marikana incident remained "an open grave".

"Where is the accountability?" he asked.