I.Coast's Gbagbo pushes for amnesty with eye on 2025 vote 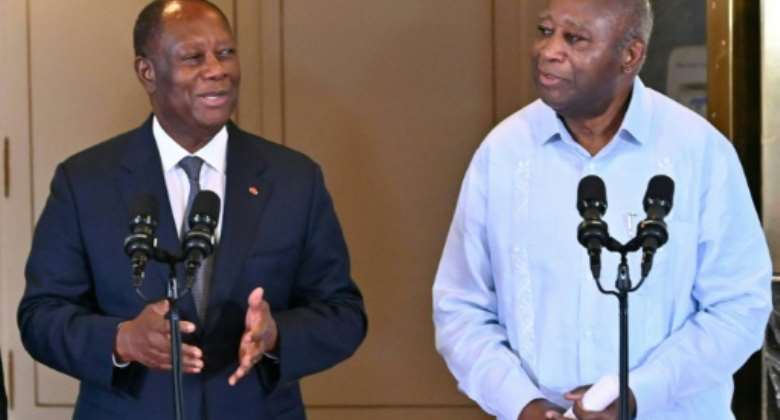 President Alassane Ouattara last week lifted the shadow of a jail sentence over his erstwhile bitter rival Laurent Gbagbo, but the measure may only go a short way towards lowering Ivory Coast's political temperature.

Gbagbo, who once fought a brief but bloody conflict with Ouattara for the presidency, came home last year after a battle at the International Criminal Court (ICC) in The Hague that ended in his acquittal on war-crimes charges.

Ouattara has since given him a friendly reception, alloting him the role of statesman to ease turbulence that flared during presidential elections in 2020 and claimed scores of lives.

Ouattara's latest move has been to pardon Gbagbo for a 20-year term he received in absentia for the "looting" of the local branch of the Central Bank of the West African States during the 2010-11 crisis.

But, say analysts, this is only a partial concession for Gbagbo.

At 77, the veteran political fox and powerful left-wing orator is still widely believed to have eyes on a return to the presidency.

Jean Alabro, a political commentator based in Ivory Coast's economic hub Abidjan, said Ouattara, 80, would have carefully "weighed" whether to pardon or amnesty Gbagbo.

A pardon under Ivory Coast law does not confer the same force as an amnesty: a person who has been convicted of a crime is barred from contesting the elections, due in 2025.

Without an amnesty, "Gbagbo will have constitutional problems being a candidate," said Alabro.

Kone Katinan, spokesman of Gbagbo's African Peoples' Party (PPA-CI), said the pardon, "such as has been issued, is a step forward, but this is not what we expected. We want an amnesty."

The pardon was issued on Ivory Coast's independence day, August 7.

It came with an announcement that Gbagbo's bank accounts were being unfrozen and annuities from his decade as president were being paid in arrears -- an amount worth hundreds of thousands of dollars.

Katinan said Gbagbo had "never" requested a pardon, adding however that Ivory Coast was engaged in a political dialogue "which should in the end culminate in an amnesty."

Several thousand people were killed and the country was divided on north-south lines.

Memories of the bloodshed revived in 2020, when Ouattara bid for a third term in office -- a plan that stoked violent protests that he was circumventing the constitution.

The "dialogue" brings together the government, political parties and civil society, with the aim of ensuring that local elections due next year and the 2025 presidential ballot unfold peacefully.

Another stumbling block in relations between Gbagbo and Ouattara is the demand by his supporters that "all civilian and political prisoners" held in connection with the conflict be freed.

About 30 people are still behind bars, including soldiers convicted for acting under the orders of Gbagbo, who has since been acquitted by the ICC.

Katinan said this issue was why Gbagbo snubbed an invitation to attend independence day celebrations in Yamoussoukro, the political capital.

"It would have been difficult for president Gbagbo to watch the parade by the national armed forces... when soldiers who served under his orders are still in prison," the spokesman said.

Another notable absentee was former president Henri Konan Bedie, who at 88 still retains political clout. He invoked "personal reasons" for not attending the parade.