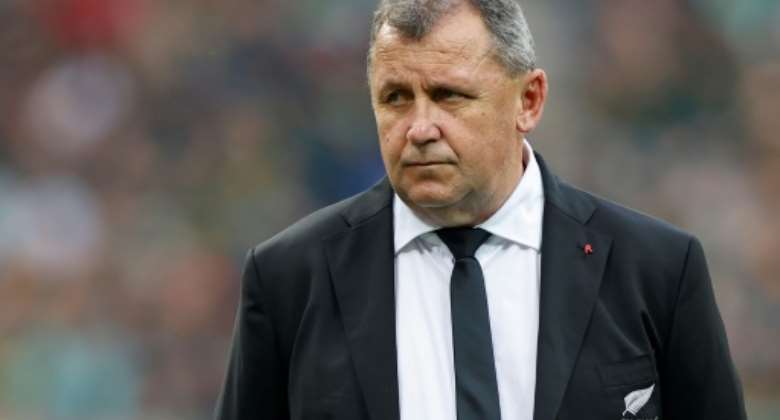 Ian Foster is battling to survive as New Zealand coach after nine losses in 26 matches.. By PHILL MAGAKOE (AFP)

The New Zealand Herald has called embattled All Blacks coach Ian Foster "a decent man who is out of his depth in a brutal business" as he prepares for a Test that could seal his fate.

New Zealand tackle arch foes South Africa in the Rugby Championship in Johannesburg on Saturday, and a sixth loss in seven Tests will almost certainly spell the end for likeable but beleaguered 'Fossie'.

The ferocity of the Springboks last weekend delivered a 26-10 first-round triumph over the All Blacks in Mbombela, pushing Foster ever closer to the exit door.

That beating -- the biggest in South Africa since 1928 -- left not only Foster but also captain and flanker Sam Cane at the receiving end of a barrage of condemnation.

Following almost a decade assisting head coach Steve Hansen, the 57-year-old former fly-half took charge of the All Blacks after a semi-final defeat by England at the 2019 Rugby World Cup.

Helped enormously by stars like Richie McCaw and Dan Carter, Hansen lost just 10 of 107 Tests, and Foster has been unable to match that record.

In charge of the three-time world champions for 26 internationals, he has lost nine, including to Ireland (three times), France and South Africa from last November.

Many critics believe time is up for Foster and, whatever the result at Ellis Park, he must quit or be axed.

"I do not think Foster can save his job now. The noise is too loud. He really is on borrowed time," says Stuff website columnist Mark Reason, who called the All Blacks "a laughing stock".

New Zealand rugby writer Marc Hinton did not spare Foster ahead of the showdown at Ellis Park, where South Africa have won nine and lost five of 14 previous Tests between the countries.

"The All Blacks are not just losing, they look befuddled. The fluency and flair, which has long been a hallmark of their game, appears to have deserted them.

"They are being squeezed and pressured and, frankly, out-executed by sides who are clearly superior to them."

Long the top ranked rugby nation, the All Blacks' dismal run has sent them plummeting to fifth behind Ireland, France, South Africa and England.

In fact, Foster has the poorest record among New Zealand coaches since the dawn of professional rugby in 1996.

Amid the media frenzy, Foster is thinking only of how he can stop South Africa winning successive Tests at home against his team for the first time since 2009.

All Blacks captain Sam Cane getures during a Rugby Championship defeat by South Africa in Mbombela on August 6, 2022.. By PHILL MAGAKOE (AFP)

"There is pressure, and we are feeling it, but our job is to look at the performance last week and improve on it," he said.

"I understand the frustration, but that does not change what we have to do. There is no point sulking. We must go to Ellis Park believing we will win."

Props Ethan de Groot and Tyrel Lomax are promoted to try and counter the power of the Springbok pack, and Mbombela try scorer and flanker Shannon Frizell is also elevated.

South Africa have made five changes and showed the depth of their forward talent by placing hooker Malcolm Marx, the man of the match last Saturday, among the substitutes.

He was replaced in a rotational move by Bongi Mbonambi, who suffered an injury while training, leading to a starting slot for third-choice Joseph Dweba.

Springboks coach Jacques Nienaber cautioned his team before the rematch, telling them that "We are in for a massive challenge because the All Blacks are desperate to turn things around".

A legitimate concern among South African supporters is whether the green and gold can match the Mbombela performance -- the best since overpowering England in the 2019 World Cup final.