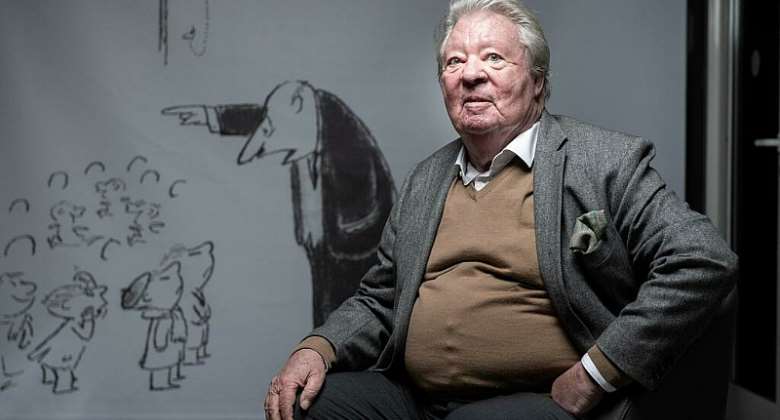 French prime minister Elisabeth Borne led the tributes to the cartoonist Jean-Jacques Sempé whose death was announced on Thursday.

The co-creator of Le Petit Nicholas, died at his holiday home surrounded by his family and friends, said Marc Lecarpentier, his friend and biographer. He was 89.

In a tweet showing the cover of one of his works, Borne hailed Sempé's range and humour.

"With Sempé, it was sometimes tears in your eyes because you were laughing. Tonight, it's tears of emotion," said Borne.

Born in 1932 in Pessac in the Gironde region in south-western France, Sempé dreamed of a career in music before pursuing his passion for drawing.

"It was easier to find a pencil and paper than a piano,” he told the French newspaper Le Monde in an interview in 2018.

He left school at 14 and made his way after the second world war as a salesman and as a freelance cartoonist for newspapers.

Change
His change of fortune came In Paris in the mid 1950s when he met the cartoon caption writer René Goscinny in the offices of the Belgian press agency World Press on the Champs-Elysées.

The two developed a friendship and produced cartoons together. In March 1959 they conjured up Le Petit Nicolas for Sud Ouest Dimanche

The cartoons - offering up idealised vignettes of French society - became an international success.

Le Petit Nicolas sold five million copies before the series ended in 1964 after a fifth collection, Joachim a des ennuis.

Sempé continued to work on solo projects such as Marcellin Caillou in 1969 and L'Ascension sociale de Monsieur Lambert in 1975.

He also collaborated with top magazines such as Paris Match, Le Nouvel Observateur and The New Yorker, for which he created around 100 "front pages”.

"The New Yorker was an unimaginable dream, like joining Duke Ellington's orchestra," he confided to Le Monde. "My first cover, it was a guy who hesitated to fly. I was lucky because it was very successful."

Considered by the younger generations of cartoonists as a model, he was particularly adored by Catherine Meurisse and Joann Sfa.

An ostensibly gruff man, Sempé admitted he was uneasy with the trappings of fame.

He told Lecarpentier in a 2011 documentary: "I am panicked as soon as I am asked a question. I'm afraid of making a mistake. I'm afraid of not telling the truth ... because there are things I don't want to say."

Where are DISECs in this whole galamsey brouhaha – Otumfuo q...
46 minutes ago

Akufo-Addo announces plan to establish Tourism and hospitali...
46 minutes ago