If SSNIT alone can save $126m from the Ghanacard, then Dr. Bawumia was right 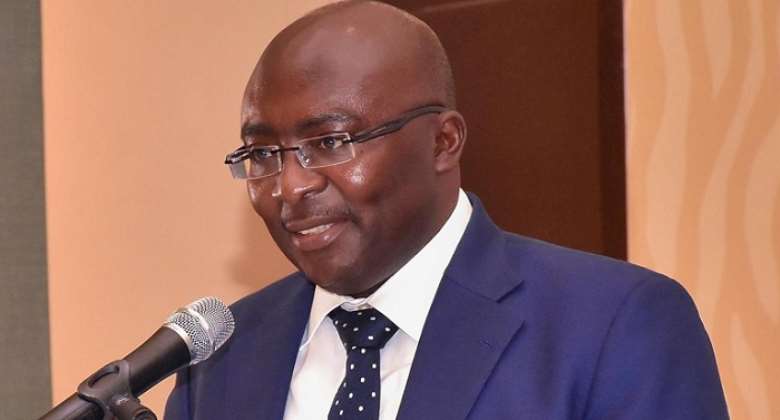 In April this year, during a lecture on the economy in Kasoa, Vice President Dr. Mahamudu Bawumia spoke extensively on how Ghana's newly-built identity system, the Ghanacard, is impacting positively on revenue mobilisation, as well as helping, significantly, in the fight against corruption.

On how Ghana's improved identity is helping the implementation of digitization to positively impact the economy, Dr. Bawumia showed, with figures, revenue generation has increased considerably since these sectors were turned digital.

And in the fight against corruption, he spoke so passionately about how the digital initiatives were ridding many government sectors of corrupt practices and saving the state significant amount of money.

I followed his lecture with rapt attention, and noticed the significant jump in revenue and output in many government services, following the implementation of digitization.

At the passport office, for instance, the office processed a total of 16,232 applications with revenue of GHC1.1m to the state in 2017. But the same office, following its digitization, received and processed 498,963 passports online in 2021, with a total revenue of GHC56.7m. That's remarkable, compared to the meagre output and revenue recorded prior to the passport application process being digitised.

Again, the significant impact of digitization in revenue mobilization is evident at the DVLA, motor insurance and mobile money interoperability service.

At the DVLA, the digitalization of the drivers licensing service in 2019, resulted in an increase in both revenue and output by over 100% in 2020, while the digitization of the motor insurance database, ensured that the insurance industry increased from 19% in 2019 to 37% in 2020 and 26% in 2021. This also resulted in increase in the value of business undertaken and revenue to the state, from GHC 566 million in 2017 to GHC2.3 billion in 2021.

These are incontrovertible data which support Dr. Bawumia's claims on how digitization and the country's new identity system (Ghanacard) is impacting positively on the economy through increased revenue mobilization.

While I was convinced by Dr Bawumia’s presentation on the positive impact digitization is having on the economy, especially revenue mobilization, I was not sure, how digitization, and the Ghanacard as the base of our identification system, would help in the fight against corruption and wattages.

However, I have had a change of mind in recent weeks, especially following the startling revelations from SSNIT on how the Ghanacard is helping them to fight corruption and wastages.

News that the Ghanacard has helped SSNIT to expung thousands of ghost names from the trust, and the staggering figure of $126m, which the trust will save because it won't be printing SSNIT cards again since the Ghanacard also serves as a SSNIT card, are welcoming.

Surely, but for the Ghanacard, SSNIT would have committed a whopping $126m just for the printing of cards for members. This would have been disturbing, for a country striving to revive its economic fortunes from global recession.

Again, I have been asking myself how, without the Ghanacard, SSNIT would have been able to rid its books of the thousands of ghost names in there, which was costing the state millions.

In the past weeks, I have learnt, with shock, how the Ghanacard and the robust biometric national identity system the country is building, is helping the country to fight corruption and save a lot of money.

For instance, how could the National Service Scheme discover the thousands of ghost names on its payroll without the Ghanacard and a biometric National identification system?

Initially, I did not understand Dr. Bawumia when he said the Ghanacard and the identity system being built would be one of the nation's biggest interventions in the fight against corruption.

The Vice President is right, especially when he said he would prefer a Ghanacard to thousands of interchanges. It is a card and a robust system which fight corruption, check wastages and a card which will save and fetch the country more money to undertake more infrastructure development.

It was a sort of a philosophical saying, backed by facts, which we all misunderstood, but events are proving Dr. Bawumia right.

I associate with the words of Dr. Tenkorang, who is also of the view that the Vice President ought to be appreciated for the robust identity system he is championing with the Ghanacard.

In the United States today, a bill is already on the table to introduce a national biometric identity card, just like the Ghanacard due to identity fraud, which is costing the US Federal Governemnt billions of dollars.

Ghana has already taken the lead thanks to the vision of an illustrious son, who is determined to see it through inspite of all the challenges.

Surely if SSNIT alone can save $126m from the Ghanacard, and the US Government is set to roll out its own Ghanacard-like national identity system, then our Vice President cannot be wrong.

He is absolutely right with his belief in the Ghanacard/national identity system being built, and its strong potential as the catalyst for our national economic transformation.

Where are DISECs in this whole galamsey brouhaha – Otumfuo q...
38 minutes ago

Akufo-Addo announces plan to establish Tourism and hospitali...
38 minutes ago