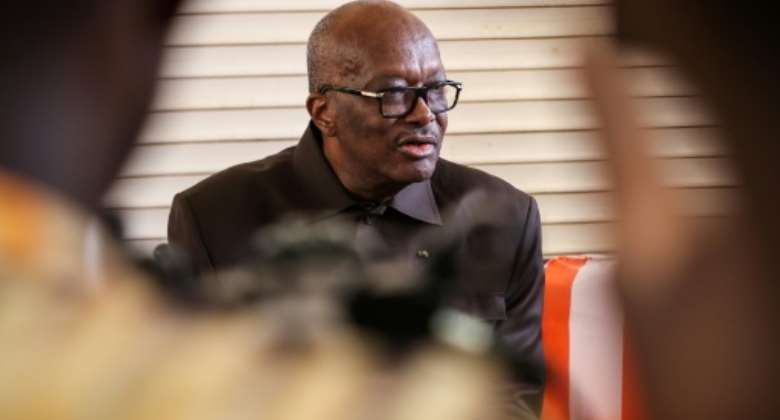 Kabore speaking at a press conference at his home in Ouagadougou last month. Supporters gathered outside to prevent him from attending a summit of ex-presidents organised by the junta. By Olympia DE MAISMONT (AFP)

Burkina Faso has allowed ex-president Roch Marc Christian Kabore to leave the country for the first time since his ouster in January, granting him permission to fly to the Middle East on medical grounds, a government source and aides said Thursday.

"After receiving the requisite authorisation from the military authorities, president Kabore will head to the United Arab Emirates on medical grounds," a member of his entourage said.

The 65-year-old former leader will leave "shortly with his wife," the source said.

A government source confirmed this account and said the authorities had "worked diligently to facilitate the trip," without providing details.

An official from Kabore's People's Movement for Progress (MPP) said: "His health has been quite poor for a while now, and he needs to undergo tests to help his medical care."

His whereabouts and welfare became points of friction with the regional bloc, the Economic Community of West African States (ECOWAS).

Kabore was first placed under house arrest in a villa in Ouagadougou before being allowed to return to his home in the capital in early April.

The military authorities said they had given him back his freedom, but his supporters continued to demand his "release".

When he made his first public appearance since his ouster in June to meet Damiba, his supporters worried that he looked frail.

They blocked him from attending a summit of former presidents the following month, called by the junta in the name of "social cohesion" against the jihadist threat.

Why go to the IMF when SSNIT can give you the money you need...
27 minutes ago

Northern Ghana is underdeveloped because of underinvestment ...
55 minutes ago