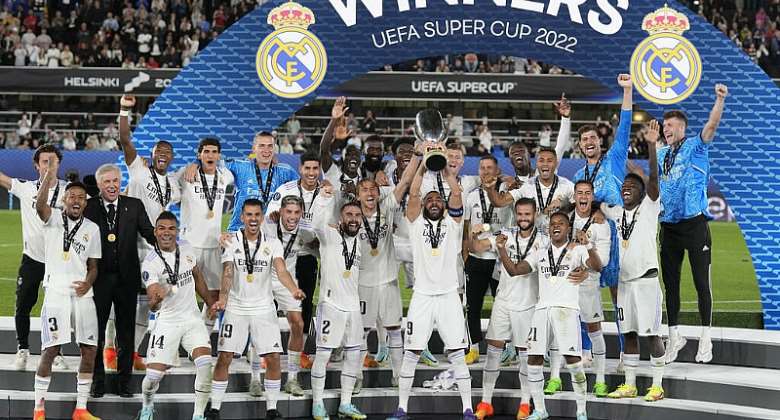 France international Karim Benzema will go into this weekend's start of the La Liga season in Spain as Real Madrid's second highest goalscorer following his strike against Eintracht Frankfurt to secure the Uefa Super Cup for a record-equalling fifth time.

The 34-year-old added Madrid's second goal mid-way through the second-half at the Olympiastadion in Helsinki on Wednesday night after latching on to a pass from Vincius Junior.

It was Benzema's 324th goal for the club that he joined from Lyon in 2009. Only Cristiano Ronaldo boasts more with 450 during his nine-year spell which ended in 2018.

Before the clash between the winners of the Champions League and the Europa League, Benzema saluted Ronaldo's role in helping him to become a more rounded striker.

“When he was here it was another kind of game," recalled Benzema. "I was like an assistant and a lot of other things.

“But he helped me a lot on the field and off it. I knew I could do more and when he left that was the time.

"I had to change my game and my ambition and at this moment in time things are good."

Benzema scored 44 goals in 45 matches last season for Madrid. He lifted the Super Cup trophy - his first as skipper - after taking over the armband from Marcelo.

Success
Madrid's fifth crown took them alongside fierce rivals Barcelona and AC Milan as the most successful sides in the competition.

“We didn't play a spectacular game, but we were really solid. Our usual,” said Madrid boss Carlo Ancelotti.

Frankfurt, who saw off Rangers in a penalty shoot-out in May to claim the Europa League, failed to threaten after Daichi Kamada spurned his chance to beat the Madrid goalkeeper Thibault Courtois when he was sent clear by Jesper Lindström.

“For many of us this was the biggest game ever,” said Frankfurt defender Christopher Lenz.

“What is important to see is that we can create chances against the top teams. We clearly didn't have many but the few that do come our way we have to use clinically."

Frankfurt, who lost their opening Bundesliga game of the season 6-1 to Bayern Munich, return to domestic action on Saturday at Hertha Berlin while Madrid begin the defence of their Spanish crown at Almeria on Sunday.

Benzema's goal-scoring feats in Madrid's run to the Champions League, La Liga and Super Cup crowns have made him the hot favourite to lift the 2022 Ballon d'Or as the world's best player.

If he were to be successful, he would become only the fourth Frenchman after Raymond Kopa, Michel Platini and Jean-Pierre Papin to win one of football's most prestigious individual awards.