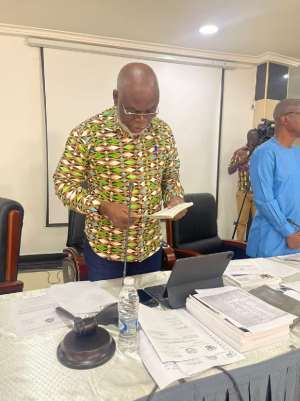 The Public Accounts Committee (PAC) has commenced sitting in Tamale to consider the 2019 Auditor General’s Report on Pre-Universities in the Northern, North East, Upper East, Upper West and Savana Regions.

The six-day sitting will consider infractions cited by the Auditor General in its 2019 Reports.

The 2019 report cited eight Pre-Universities and two Technical Universities for irregularities related to outstanding loans, and staff debtors, cash irregularities, for misapplication of funds, non-retirement of imprest, unapproved expenditures and non-payment of internally generated funds into the Consolidated Fund and payroll irregularities, among others.

The Chairman of the Committee and Deputy Minority Leader, Mr James Klutse Avedzi at the sitting, expressed worry about how public institutions delayed in responding to requests made by other institutions to help them do their work.

He, therefore, urged institutions to ensure that they work in accordance with the Public Procurement Laws and the Financial Management Acts to avoid violating the laws that could result into sanctions.

The PAC will also interrogate the Report of the Auditor General on the Management And Utilisation of District Assemblies’ Common Fund and other Statutory Funds for the year ended, 31st December, 2019.

External factors stripped off gains Akufo-Addo gov’t made in...
49 minutes ago