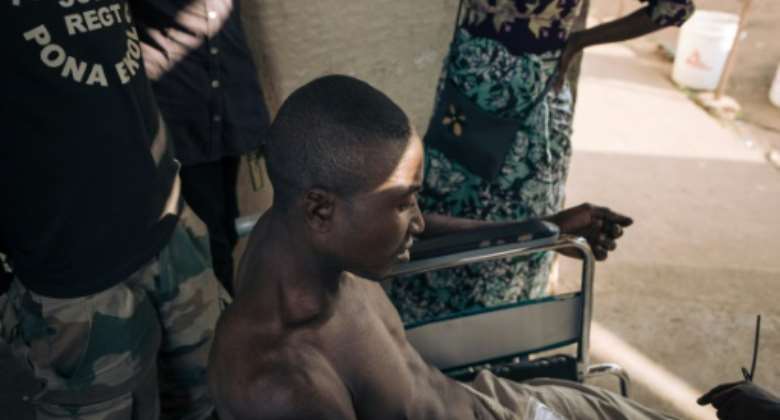 Rebels, soldiers and civilians make up the wounded at the hospital in Rutshuru. By ALEXIS HUGUET (AFP)

Dozens of bandaged patients lounge on beds in a hushed hospital ward in eastern Democratic Republic of Congo, groans of pain occasionally breaking the silence.

Rebels, soldiers and civilians make up the wounded -- all victims of the latest flare-up in violence in eastern DRC's North Kivu province.

After lying mostly dormant for years, the M23 rebel group resumed fighting late last year and has since captured swathes of territory in North Kivu.

The clashes have destabilised regional relations in central Africa, with DRC accusing its smaller neighbour Rwanda of backing the militia.

Despite denials from Kigali, an unpublished report for the United Nations seen by AFP this week also pointed to Rwandan involvement.

Until late March, M23 fighters staged hit-and-run attacks on Congolese troops. But then the conflict morphed into one of mutual artillery barrages, as the militia tried to prevent the government from recapturing lost territory.

The surgeons, anaesthetists and nurses working in the hospital find little rest. By ALEXIS HUGUET (AFP)

One soldier in the hospital in the town of Rutshuru said he had come under shelling that lasted "for hours".

He was disembowelled by shrapnel some 20 kilometres (12 miles) away, in an area now in rebel hands.

Many on the ward -- which reeked of sweat -- were gravely wounded. Some had lost limbs in the brutal fighting. Others a jaw.

Dozens of children were also being treated for severe malnutrition after being forced to flee the clashes.

AFP has not named patients or doctors in the hospital to protect their safety.

'Two bullets in the arm'

A mostly Congolese Tutsi group, the M23 first leapt to prominence in 2012 when it briefly captured the eastern DRC city of Goma before being driven out.

But its dramatic recent resurgence and the sophistication of its attacks have drawn suspicion of Rwandan involvement, which the small central African country has repeatedly denied.

Dozens of children are being treated for severe malnutrition. By ALEXIS HUGUET (AFP)

The head of the United Nations peacekeeping mission in the DRC, Bintou Keita, recently told the UN Security Council that the M23 rebels were behaving "more and more like a conventional army".

This week, independent experts also presented a report to the UN Security Council, arguing that Rwanda had both deployed its own troops in the DRC and coordinated with the M23.

The upsurge in M23 violence triggered a wave of patriotic feeling across the DRC, with anti-Rwanda protests erupting nationwide in May and June.

In the east, some people took up arms against the perceived invader.

An X-ray of a wounded Congolese soldier's leg. By ALEXIS HUGUET (AFP)

"I took two bullets in the right arm," said a scowling young man in the hospital, who had joined a militia to fight alongside Congolese soldiers.

But he said he was attacked by another Congolese militia -- not the M23 -- while guarding a rear base, an example of chaotic battlefield conditions.

"Everyone has their own agenda, there's no collaboration between us," the fighter said, as his wife stood nearby clutching a baby to her chest.

The surgeons, anaesthetists and nurses working in the hospital find little rest.

Doctors performed surgery on 271 patients in June alone, according to the hospital, with a third of that number receiving treatment for gunshot wounds.

Two nurses sit beside a patient recovering from surgery. By ALEXIS HUGUET (AFP)

One surgeon, removing his blood-stained gloves after performing an operation, said that he and colleagues were being forced to prioritise care based on "chances of survival".

"It's very difficult," he said, but noted that the situation had been far worse at the beginning of July.

At the other end of the hospital, doctors were treating dozens of severely malnourished children.

Some of the weakest were hooked up to feeding tubes. Others had skin that peeled off in large shreds.

Their cries mixed with the sound of whirring medical equipment.

"It's overflowing," the supervisor of the ward said.

"If nothing is done in the next few weeks, there'll be a catastrophe".

Silence descends when the children are called outside to a cooking demonstration, accompanied by their parents.

A newborn baby sleeps in the same room as gunshot victims on the mend. By ALEXIS HUGUET (AFP)

Only the weakest, who lack the strength to cry, are left behind.

Exhausted doctors take advantage of the break to slump into plastic chairs and scroll through their smart phones.

One of them asks a mother with her child whether she might return home soon.

"It's impossible," she said, pointing to the ongoing violence. "Please, you must continue to help us".