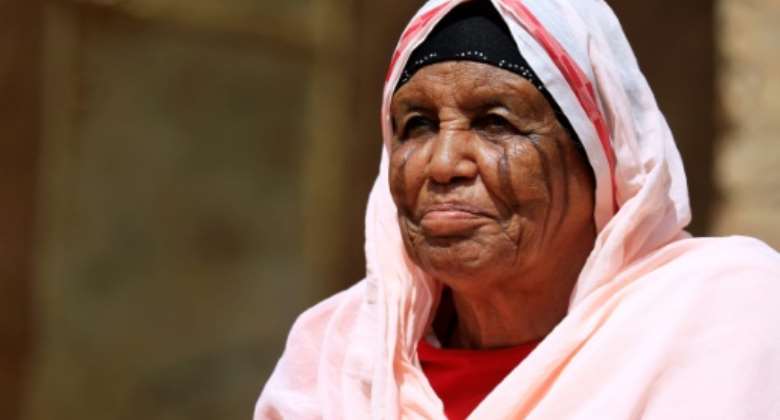 Kholoud Massaed of the Hadaria tribe in Sudan, bears blade scars on her face. By ASHRAF SHAZLY (AFP)

Kholoud Massaed of the Hadaria tribe in Sudan vividly recalls the day her face was scarred with a sharp blade, an ancient practice that was once common.

Now in her 80s, she still carries on each cheek the three lesion lines that have since darkened over time.

"They took me to a man who was known to carry out this practice. He did it with a small knife," Massaed told AFP in her village of Om Maghad, some 66 kilometres (40 miles) south of Khartoum.

"I was seven years old and I cried. They told me I should have these facial marks as it's a sign of beauty."

For males, the marks have often varied from small vertical or horizontal lines on the cheeks to shapes resembling a "T" or "H". By ASHRAF SHAZLY (AFP)

Tribal scarring, an ancient practice that used to be commonplace in Sudan, involves marking the skin, mainly to identify tribal affiliation or as a symbol of attractiveness.

It was also practised in Sudan, where according to Minority Rights Group roughly 30 percent of the population is believed to belong to African minorities, while the rest are Sudanese Arabs.

The practice has greatly reduced over the years, with many now viewing it as unsanitary, archaic and obsolete.

"People used to sing for it," said Massaed. "It had great value in the past."

For a long time, she struggled to come to terms with her scarring, and now she is grateful that the practice has been dying out.

When her own children came of age, Massaed refused to let them endure the same agonies.

"I didn't take any of my children to be marked," she said. "It's a different time now."

Tribal scarring, an ancient practice that used to be commonplace, involves marking the skin, mainly to identify tribal affiliation or as a symbol of attractiveness. By ASHRAF SHAZLY (AFP)

"Only old people still bear these markings, not the younger generations."

Like Massaed, Fatma Ahmed of the Ja'aileen tribe bears similar lines on her face.

"The pain lasted for weeks," she said, adding that she used many traditional healing ointments to ease her suffering.

Communities in remote rural areas of Sudan have long struggled to access proper health care because of poor facilities and infrastructure.

Many men were also marked for life.

For males, these marks often varied from small vertical or horizontal lines on the cheeks to shapes resembling a "T" or "H", according to Babiker Mohammed from the Mahas tribe.

"It was not a choice back then. It was inevitable," said the 72-year-old.

When her own children came of age, Massaed refused to let them endure the same agonies. By ASHRAF SHAZLY (AFP)

"People just took children to the person known for marking faces, and he would mark the face according to their tribe name," he said.

Mohammed said that he too refused to mark his own children.

"I'm probably from the last generation that had their faces marked" in Sudan, he said.

Idris Moussa Abdelrahman, who is from the Ja'aileen tribe, hopes the practice never returns.

"It's a distortion and harms people for no reason."

My wealth exaggerated; it’s crass to define me by my wealth ...
40 minutes ago

We need peace in Bawku, we cannot make our children inherit ...
40 minutes ago