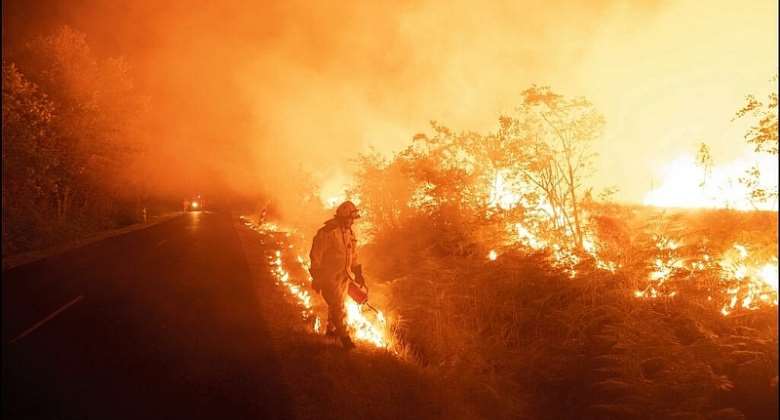 Wildfires continue to rage in south-western France, destroying at least 16 houses, burning 6,000 hectares of land and forcing the evacuation of almost 6,000 people. Scientists blame the extreme weather on a "double jet stream" meteorological event that has trapped warm air over western Europe.

France, like the rest of Europe, is coping with a series of rolling heatwaves and an ongoing drought that has triggered multiple wildfires across the continent in recent months.

Authorities in the wine-growing Gironde department said in a statement: "The fire is rampant and has now spread to the Landes department," adding that 500 firefighters were mobilised.

The Gironde was hit by two wildfires in July that destroyed more than 20,000 hectares of forest and led to the evacuation of almost 40,000 people.

Fires were also raging on Tuesday in other parts of the country, including the southern departments of Lozère and Aveyron, where close to 700 hectares have already burnt and where Interior Minister Gerald Darmanin is due to visit later in the day.

Another fire is spreading in the Maine et Loire department in western France, where 650 hectares have been scorched and 500 are threatened, according to local authorities.

France is experiencing an "historic" drought exacerbated by a third extreme heatwave this summer with water restrictions ordered in nearly all its 96 mainland departments.

More than 47,000 hectares have already burnt in France this year, including a record amount in July alone, according to the European Union's satellite monitoring service EFFIS.

Meteorologists say the recent heat waves are the result of a specific meteorological event, called a "double jet stream", which favours rising temperatures.

Scientists say that France is caught in a so-called "heat dome" between two corridors of the powerful jet stream winds to the north and south, which trap warm air over Western Europe.

Due to climate change, this extreme weather phenomenon is expected to expose western Europe to high temperatures in the years to come.