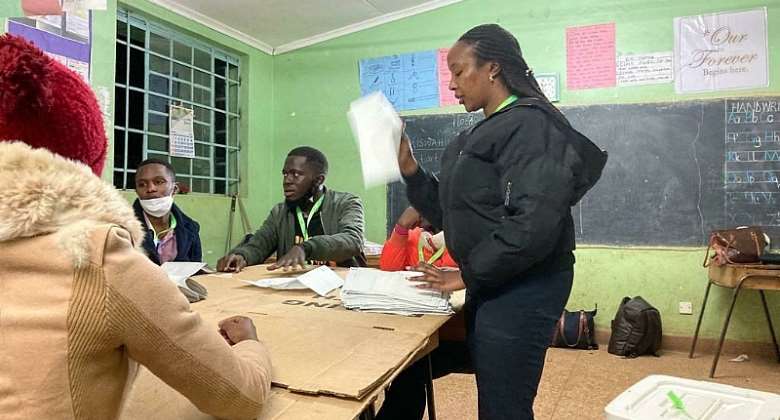 The vote count to determine the next president has begun by the Independent Election and Boundaries Commission (IEBC), with the two main contenders, veteran politician Raila Odinga and Deputy President William Ruto separated by less than 10,000 votes.

“Transmission of results has started,” said IEBC Chairperson Wafula Chebukati, adding that there was a large turnout, without giving the numbers.

Some polling stations throughout the country did not close until after 9pm Kenyan time because they were delayed in opening, he said from Bomas of Kenya Center in Nairobi, where the national count is occurring.

As of 11:30pm Kenya time, preliminary results from IEBC indicated that Odinga was ahead by roughly 10,000 votes.

Electronic transmission
Each stream gives its vote count to the head of their polling centre. This is Presiding Officers enter the data on the signed results sheet into specially configured mobile phones, which transmits the results simultaneously to the election results centres at the constituency, county and national level, according to the IEBC.

Although the tallies are sent electronically via mobile phones, analysts are concerned that the mobile network in some parts of the country will be unable to transmit the results.

The last voter
Earlier at Garden City Estate, an affluent neighbourhood in Nairobi, last-minute voters were coming to vote in the last 10 minutes before polls closed at 5pm. Victoria Muchira was officially the last in line, although the polling manager allowed three people to vote after her.

Clad in a green kerchief and holding purple rosary beads, Murchira said that she usually votes as late as possible.

“I'd rather vote in the evening because there are usually big queues. I have done my part. God will do the rest,” she said.

An African Union election observer who was not authorized to speak on the record said that they had noted it was “quiet and orderly.” The observer added that the only long lines were at one polling station because none of the biometric Kenya Integrated Election Management System (kiems) tablets were working very well.

A micro vote count to reflect the national count

After a 30-minute break at the end of the vote, tallying in the 13 streams at Garden City Estate began in earnest. At station five stream, where voters with names from Francis to Irene cast their ballot, polling station presiding officer Sarah Muthoni began the vote count.

Out of the 686 registered voters expected to vote at station five stream, 438 voted for a total of 64 percent of people going to the polls.

Muthoni first separated all the paper ballots into piles for each presidential candidate and showed them to the political party agents who were observing the vote count. When a possible spoiled ballot emerged, she showed it to the agents who discussed how each vote should be treated.

One ballot where the photo was checked and not the box was approved by everyone, while one ballot with two checks in one box was deemed a spoiled ballot.

In less than an hour, Muthoni counted 223 votes for Raila Odinga, 201 for William Ruto, five for David Mwaure of Agano Party of Kenya, and three for George Wajackoya of the Roots Party of Kenya. Six ballots were declared spoiled.

The numbers reflect the tight race between Odinga and Ruto on a micro scale. Garden City Estate has never been a stronghold for Odinga, showing a big change from previous elections.

While both she and Deputy President Ruto's running mate come from the majority Kikuyu community, it is historic because for the first time, the president will not come from the two ethnicities that have dominated Kenyan politics since independence in 1963.

This is the third election where the diaspora in 12 countries has been allowed to vote.

The results must be announced within a week of the vote, but with low voter turnout, political pundits indicate that the final result for the presidential election will likely be later this week.