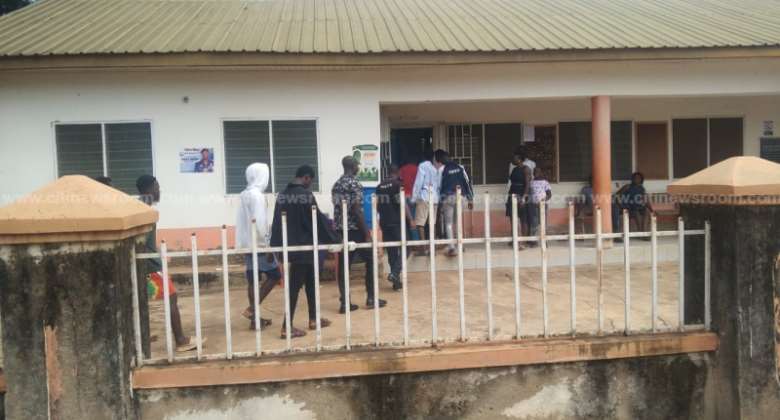 The Akim Tafo Magistrate Court has sentenced the nine accused persons standing trial for attacking a teacher of the Anyinasin Methodist School to pay a fine between GH¢1,800 (150 penalty units) and GH¢2,400 (200 penalty units) each or in default serve three months imprisonment with hard labour.

The third and seventh accused persons who were charged with 3 counts for conspiracy to commit crime to wit threat of harm, being on the premises for unlawful purposes were sentenced to pay a fine of 150 penalty units each on 1st and 2nd counts and fined 200 penalty units on count 3 or in default serve 3 months imprisonment which will run concurrently.

The court presided over by Her Worship Josephine Akyaa Dwamena took into consideration the youthful age of the accused persons, the fact that the accused persons were all first-time offenders and wants it to serve as a deterrent for other members of the community before passing her judgement.

The drug seller who was charged for possession of a restricted drug without lawful authority, 45-year-old Kwasi Gyentu Darkwah, was sentenced to pay a fine of 250 penalty units [GH¢3,000] or in default 3 months imprisonment with hard labour.

The court, which referred accused persons 8 and 9, 17-year-old Annor Benjamin and 17-year-old Tiboah Addo Samuel to the juvenile hearing, asked the social welfare department to provide a report on both accused persons for sentencing on 23rd August 2022.

Speaking to Citi News, the Abuakwa North Municipal Chief Executive, Alhaji Umar Bondinga who welcomed the ruling by the court while indicating that the culprits will now become ambassadors of good deeds said this will deter other members of the community from embarking on such unlawful acts.

The Abuakwa North Education Directorate believes the teachers will now be able to carry out their mandate in peace.

Maxwell Owusu, speaking for the education directorate in the Abuakwa North Municipality, said processes have begun for the affected teacher to be transferred to a school in the municipal capital.

“Once we vacate, we will start with his reposting processes, and we would want to bring him closer to one of the schools in our municipality,” Mr. Owusu said.