Mozambican unions hit snooze on a national strike: why it's a bad thing for workers 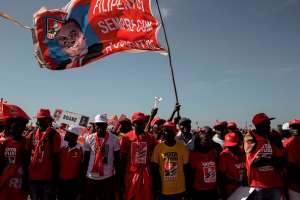 The surge in food and fuel prices has led to calls for national shutdowns across southern Africa. In Mozambique, trade unions issued a statement denouncing the rising cost of living, inadequate public services, generalised corruption, political patronage in the public sector and lack of compliance with labour protections.

The statement, which encapsulated popular demands, was undersigned by union federations historically tied to the ruling party, Frelimo. Its seemingly militant tone took much of Mozambican civil society aback. It read:

The trade union movement reserves the right to mobilise a strike on a national scale … if nothing is done to alleviate the suffocation of workers and their families, and the general population.

Some saw the statement as a ray of hope that unions were finally awakening from their slumber. Others, however, argued that it was merely a political ploy by a co-opted union leadership desperate for a few crumbs from the ruling party.

The wording of the statement was characteristically ambiguous. While it highlighted the right to strike it also sought to dissuade strike action.

Ultimately, Mozambican unions “hit snooze” on a national strike. Social media filled the void . The ad hoc group “Upset and Desperate with the Country's Crisis” called for a national stay-away.

Trade unions make up the largest mass-based organisation in the country. But their failure to represent the interests of Mozambique's working classes has created the space for authoritarian populist movements to thrive.

A lion without teeth

The origins of Mozambique's trade union movement lie in worker-run committees, known as conselhos de produção . These were established during the transition to independence to safeguard production, as settlers fled en masse, many sabotaging factories as they left.

In 1983, the committees were consolidated into the Organisation of Mozambican Workers , a mass-based organisation of Frelimo. Conceived of as sites of popular democracy, worker organisations became a conveyor belt for party decisions, centred on increasing production and productivity.

The power of the trade union movement was further undermined by economic policies agreed to as part of successive structural adjustment programmes put in place by the International Monetary Fund and World Bank. These included the liberalisation of the economy, the privatisation of public services and enterprises and the deregulation of the labour market.

With little state support, newly privatised firms struggled to compete in global markets. Widespread retrenchments followed. Between 1988 and 2003 – the period of mass privatisations – membership of the Organisation of Mozambican Workers dropped from 300,000 to 90,000 .

Meanwhile, the transition to a multi-party democracy weakened the organisation's claims on the ruling party and its ability to respond to the repressive actions of newly privatised firms. In 1992, three unions split to form the rival National Council for Free and Independent Trade Unions. The new federation claimed to be independent of the ruling party. However, some of its leaders were co-opted into official positions or embroiled in alliances with big money.

Despite its limitations, the trade union movement constitutes the largest mass-based organisation in Mozambique, followed by the National Union of Peasants . Over the last two decades its membership has grown to just over 350,000 . This reflects the expansion of private sector employment, the extension of unions to the public sector, and efforts to unionise domestic workers and informal workers.

Indeed, nearly a third of union members are in the informal economy .

Union membership nevertheless still represents a small sliver of the working classes. Only 12% of the economically active population are salaried workers . The vast majority of the economically active population cobble together a livelihood from a multiplicity of informal activities on and off the farm. They are camponeses or peasant farmers, petty traders and artisans.

Union density corresponds to about 30% of the formal private sector . This is not bad by regional standards . But its representation of the working classes is constrained by widespread informality.

The Mozambique trade union movement recognises the need to become a more relevant force in society, lest it wither away altogether. But several factors have limited its ability to do so.

Firstly, there's the country's authoritarian political culture, characterised by the suppression of debate and contentious politics. The insurgency in Mozambique has only strengthened the power of the state to restrict democracy.

Indeed, the trade union statement calling for a national strike began by repudiating any internal or external forces which support “the actions of terrorists in the province of Cabo Delgado”.

Secondly, the proliferation of civil society organisations, dependent on donor funds and averse to class-based politics, has undermined alliance-building. Alliances around a progressive political agenda have been further fragmented by the trade union movement's perceived acquiescence to political power and its inability to adequately represent the interests of Mozambique's working classes. This includes its own members.

But the union movement struggled to get off the fence, preferring to issue a follow-up statement dissuading vandalism. As in the general strikes of 2008 and 2010 , it was the multitudes of un(der)employed rather than trade unions who paralysed the city.

It is unlikely that material conditions for a national strike will disappear. The question is what role the trade union movement will play. There is the potential for alliance between progressive national unions and other sectors of civil society, including the peasant movement. After all, workers rely on peasant production to subsidise their low wages and peasants on casual work to sustain production.

By Ruth Castel-Branco, Research Manager, University of the Witwatersrand And