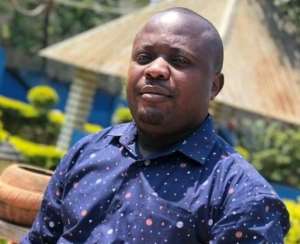 On August 4, a person identifying himself as a “general” with the Patriotic Force and Integrationist of Congo (FPIC) armed group sent a message to Bafwa, a reporter and editor with the privately owned broadcaster Candip FM in the northeastern province of Ituri, threatening him over his recent coverage of the group, according to news reports and Bafwa, who spoke to CPJ in a phone interview.

The message, which CPJ reviewed, accused Bafwa of sharing “false messages,” saying he should stop and “will not work with anyone else.”

Later that day, the same person called Bafwa and said he would be killed if he continued speaking publicly about the FPIC, the journalist said.

“Congolese authorities should ensure the safety of journalist Jean Christian Bafwa Kabaseke and all other reporters working across the country to inform the public,” said Angela Quintal, CPJ’s Africa program coordinator, from Durban, South Africa. “The threats received by Bafwa are yet another example of the dangers faced by journalists covering security issues in the eastern DRC.”

CPJ called the two phone numbers the person used to contact Bafwa, but no one answered.

In a July 28 broadcast on Candip FM, Bafwa criticized members of the FPIC, also known as Tchini ta Kilima, over their alleged collection of 2,000 Congolese francs (US$1) at roadblocks on the road between Bunia and Komanda, two cities in Ituri province, the journalist told CPJ.

During the August 4 call where he threatened Bafwa with death, the caller said that people traveling along the road between Bunia and Komanda had paid the armed men voluntarily. Bafwa told CPJ that he stood by his reporting and had rigorously fact-checked his investigation into roadblocks set up by the armed group.

When CPJ called the military governor of Ituri province, Johnny Luboya N’kashama, one of his staff members answered, declined to share their name, and promised to pass a message to the governor about the threats against Bafwa. CPJ had not received any response by the time of publication.

E-Levy: Gov’t determined to behave like a vampire to suck th...
57 minutes ago

Gov’t will hide behind IMF discussions to force more hardshi...
57 minutes ago