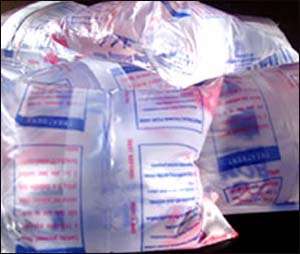 Our elders say that “when a serious matter is about to manifest itself, it does not arrive bearing a flag”.

In other words, no matter how serious the issue might be, it may creep into the public’s consciousness; slow, silent, hardly visible. Until, like a virus of the Covid-19 type, it strikes all at once – everywhere; debilitating; multiple victims; sometimes leading to fatalities.

These fearsome thoughts entered my mind when I read a headline from The Chronicle newspaper, as quoted on the Internet, which asked bluntly: “S***t In Sachet Water? Consumers Mad Over GSS Report.”

According to the article, QUOTE: “Social media (Twitter) went haywire ... following the banner story of The Chronicle captioned “Beware! The Sachet Water you consume May Contain S***­t.” Ghanaians expressed mixed reactions over the health alert raised by the Ghana Statistical Service (GSS).

“Whilst others were utterly surprised over the development, [some commenters] claimed to have been in the know. Others also described the headline by TheChronicle as ‘wild’. [One journalist was surprised that] ”the development had now come into the public domain”.

“This menace” (he said) was “not only linked to the sachet water industry, but public water systems, [which] had been contaminated”

Another person asked:: “So why do we pay [the] Standards Authority? And district assembly workers?” A third asked: “Y’all now realising?” He alleged that he “knew this faecal matter existence in Ghanaian sachet water five years ago”. UNQUOTE

However, these questions seem to me to be minor, in relation to the problem of safe water in Ghana, generally, these days. The major issue is this: has galamsey not coarsened us to accept the pollution of the country’s water sources as inevitable?

If big rivers like Ankobrah, Pra, Birem, Tanoh and Densu have turned chocolate-brown in colour, and have stayed dirty-coloured for years and years, what guarantee do we have that they and their tributaries are still safe to drink, irrespective of how much chemical treatment is applied to trying to make them safe?”

Here is another report which signals that the matter is trying to “raise a flag” to show the Ghanaian public that the problem is absolutely serious;

“The Managing Editor of the Insight newspaper, Kwesi Pratt Jnr. [COMMENTING ON] this, has asked the Ghana Standards Authority to up their game and ensure that sachet water producers adhere to [THE] rules in production.

"We urge the producers to be careful and mindful of their production because it's about public safety. [The] Standards Board also needs to be up and doing..." he said on Peace FM's morning show 'Kokrokoo'. UNQUOTE (Source: Peacefmonline.com)

However, these questions seem to me to be relatively minor, in relation to the problem of safe water in Ghana, generally, these days.

The major issue is this: has galamsey not coarsened us to fatalistically accept the pollution of the country’s water sources as inevitable? If big rivers like Ankobrah, Pra, Birem, Tanoh and Densu have turned permanently chocolate-brown in colour, and continue to stay dirty-coloured for years and years without frightening us to death, have we not begun to regard the situation as the “new normal”?

What guarantee do we have that the big rivers and and their tributaries (as used by the communities they serve) are safe to drink, just because an attempt is made to apply technical treatment to them?”

I fear that it stands to reason to expect water production generally, in our current situation, to have become one of the most lucrative enterprises in the country. And we know that commercial success is sometimes built on cutting corners. Whenever I travel out of Accra, I am always offered sachet water, but I stopped accepting it ever since I drank some about ten years ago and had a tummy upset that lasted for over three weeks.

These days, I always carry beer with me whenever I travel. But, of course, I need water to take almost every medicine prescribed for me, so I am not safe, despite my caution. In any case, isn’t beer also composed of about 75% water? And the “bottled” water I gladly use to take my medicine, isn’t it manufactured by the same water-producing companies that manufacture sachet water?

As I pointed out at the beginning, serious issues creep up on us. Unless we come to regard the situation as a public emergency of the Covid type, and take drastic, or even ruthless steps to salvage our water sources and also police the manufacture of water by the water-producing factories, we shall begin to fall ill “by heart” without knowing why.

And even we declare a state of “health emergency, how many well-equipped, modern disease-detection establishments have we got in the country, anyhow? If we decide to meet our health needs squarely by investing in the acquisition of personnel and materiel , how do we find the money in these “IMF-consultation” days?

You see, the true nature of our problem is that diseases carried by water are very many. They include cholera (also known as “the dirty hands disease”); diarrhoea and dysentery. Diarrhoea, “though common and easy to treat in sanitary living conditions, can be deadly without medical care and clean water, since the rapid loss of fluids can lead to severe dehydration” (say the scientists.)

Also on the list of frightening water-borne diseases are Typhoid Fever, E- coli, Hepatitis A and Salmonella. According to Wikipedia, [https://en.wikipedia.org › wiki › Waterborne diseases] “waterborne diseases are conditions, 47 of which are caused by pathogenic micro-organisms that are transmitted in water. These diseases can also be spread while bathing.”

In Ghana, of course, our situation is worsened by the discharge of mercury and other chemicals into rivers, as sand dredged from riverbeds and river-banks during galamsey operations. This type of water pollution is, currently, the main cause of dangerous water pollution in Ghana. And annoyingly, it is entirely man-made, which means it can also be “man-stopped”.

Our Government agencies have attempted, sporadically, to conscientise galamsey operators to realise the danger their activities pose to the very communities whose economic welfare they espouse to promote. They have used their political influence to persuade the Government that it should go softly-softly on galamsey suppression, and that they can transform galamsey from an illegal process into a well-supervised “community mining programme”..

But, the Government should be aware of our ancient saying that “if you don’t know what death is really like, just look at sleep!””

It is these same persuasive and resourceful would-be “community benefactors” who have used every method possible to embarrass the Government by defeating all its announced objectives, as regards galamsey.

They clandestinely transport excavators and bulldozers in broad daylight to our rivers, to ruthlessly churn the riverbeds over and make the rivers dangerous to both man and beast.

It is also they who bribe – or intimidate -- the police and local authorities to close their eyes to the illegal transportation of galamsey equipment like changfans.

And it is they who use their political clout to import Chinese technicians illegally to engage in the more lucrative galamsey practices that bring money in very quickly, but also kill our rivers overnight.

It is a matter of gold or our lives.

For “money is sweet”.

I mean gold so intoxicated King Midas (in the ancient Aesop story) that he asked to be empowered to “turn everything he touched into gold”. Meanwhile, he’d forgotten that food has to be touched before it can be eaten. His greed led him to an early grave, of course.

Similarly, the influential politicians who are using all manner of subterfuges to persuade the Government to look the other way whilst they carry out galamsey disguised as “community mining”, will no doubt find themselves dead and their ill-gotten gains exposed to public ridicule. (This has happened to at least one powerful politician, who shall remain nameless, already!)

The only trouble is that these money-grabbing charlatans will probably take a lot of innocent people with them, when fate catches up with them!