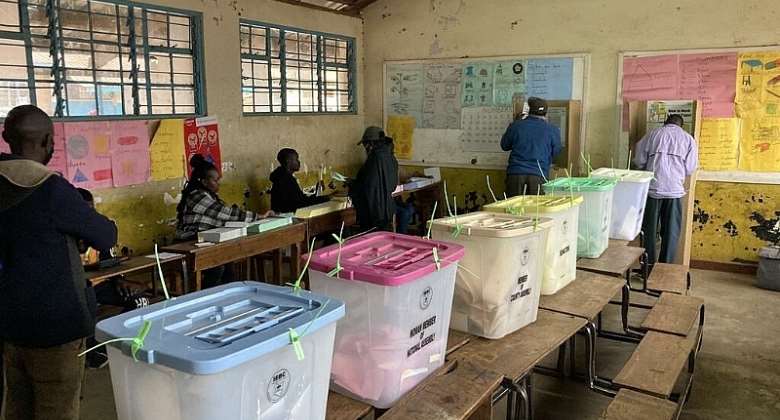 Kenyans went to the polls on Tuesday to vote for one of four presidential candidates as President Uhuru Kenyatta steps down after his second term. Polls officially opened at 6am across Kenya with a few glitches and a seemingly low turnout.

Former prime minister and veteran politician Raila Odinga of the Azimio la Umoja coalition is neck-and-neck in polls in the race for the presidency against William Ruto of United Democratic Alliance, the Deputy Vice President.

The two other candidates, David Mwaure of the Agano party and George Wajackoya of the Roots Party of Kenya are not expected to garner a large percentage of votes, but their participation could push the vote into a second round.

Odinga was greeted with much fanfare in Kibera, the large informal settlement in Nairobi Tuesday morning, as thousands came out to jog by his car as he entered the Old Kibra Primary school, screaming and blowing whistles, one of the symbols of his movement.

Ruto voted at his polling station in Sugoi, in the Rift Valley, right before 6am because he said he had made a commitment to be there at that time.

At Moi Primary School in Nairobi's central business district, voters were bundled up against the cold and waiting in line to vote at one of the eight polling streams.

Many of the people voting at this station work in the surrounding hotels and businesses. They were in line early in order to go back to work even though it is an official holiday.

Richard Makundi, a hotel chef, was at the front of the line. He'd arrived at 2am so he could go back to work.

Inside the school, a poll worker announced the vote open at 6:11am, but the police in attendance did not open the gate. After lots of yelling, voters stormed the gates at 6:24am and ran towards their polling stations.

Brian Ngesa was in line at 4am, but after voters ran inside, he got to the front of the line.

“I feel great after voting,” he said, showing his inked pinky.

Voters will be marking their ballots for six candidates: president, governor, senator, member of parliament, women's representative, and county representative.

However, the Independent Election and Boundary Commission (IEBC) announced Monday evening that it had suspended elections for governor in both Mombasa, Kenya's second largest city, and in Kakamega.

It also suspended the vote for MPs in Kacheliba and Pokot South. All were due to ballot mix-up and misprinted ballots.

Glitches in the system

With 22 million Kenyans registered to vote, the IEBC made an effort to create a more streamlined voter process by posting the names of the registered voters a week before, with which line they would stand in.

The lines are alphabetical by first name.
Voter Hassan Gore stood alert at Old Kibra Elementary school in Kibera, Kenya's largest informal settlement, volunteering to help people who could not find their lines.

“There have been problems when people wait in line, enter the polling station and then realise they are in the wrong line,” he says.

Kibera voter Rahema Marjani was frustrated because she couldn't find her name on the posted voter list and had been in the polling station since 6am.

“I'm in line hoping to vote. The time I spent here I could have made ugali for my children and washed some clothes to make money,” she said.

Pauline Atieno, who came at 5am, had a hard time reading the list.

“The names are so small, I couldn't see mine,” she said.

The voter gives the poll worker their voting card and puts their thumb on a biometric Kenya Integrated Election Management System (kiems) tablet, which will pull up the voter's information and photo.

After verifying the person with the kiems tablet, the voter is given a ballot.

Some voters who work with their hands have difficult thumbprints to read. One mason who went to vote was asked to wash their hands, but ultimately the poll head had to revert to the printed poll register to ok the person to vote.

Candidate Wajackoya faced a voting setback after the kiems tablet failed to read his fingerprint and his polling station in Matungu, Western Kenya, did not have the manual voter list.

The IEBC also established that a maximum of 700 voters vote per polling station in order to ensure short wait times. But this morning's turnout was poor in comparison to past elections.

“The 2017 elections, there were a lot of people, but this one, there are few. I'm so surprised,” said Hardly Liyengwa, who voted early and made the observation.

Local press reported that a polling station in Ruiru, Kiamu county, central Kenya, had not had a single voter by 10am.

Although voting day is an official holiday, those who are working said they would go in the afternoon to escape the long lines.

The polling stations are making concessions for the aged, the ailing, and pregnant women.

And some voters do not have the means to get to the polls.

“I'm registered to vote, but can't go because I don't have transport,” said Nelson Kimwere, a bodaboda (motorcycle) taxi driver. He couldn't get to Muranga, outside Nairobi, because he would need to take a bus.

“I'm so ashamed my vote is lost,” he said, despondent.

Youth voter apathy has been an issue after the IEBC voted a rise in registered voters, but a drop in people registering under the age of 35.

On Naivasha road in Nairobi, Kevin Mudonga, 25, sells vinyl fabric. He is registered to vote but will not be casting his ballot.

The polls will close at 6pm, and after the manual tally done at the polling station, the results will be transmitted electronically for the central vote count.

Deaf Association calls for deaf-friendly curriculum for deaf...
1 minute ago

‘Something is wrong somewhere’ — Otumfuo wonders why galamse...
1 minute ago