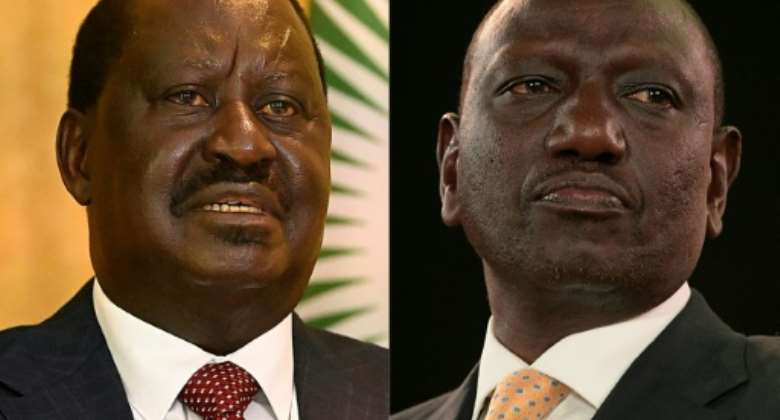 Raila Odinga (left) and William Ruto are the frontrunners in the presidential race. By Simon MAINA (AFP/File)

Millions of Kenyans go to the polls Tuesday, with East Africa's powerhouse on edge as two political heavyweights battle it out in a fiercely contested race for the presidency.

Kenyans are praying for a peaceful transition of power after almost a decade under President Uhuru Kenyatta, but concerns about vote-rigging linger in a nation still haunted by previous election disputes that descended into deadly violence.

The vote is taking place as the country struggles with soaring prices for food and fuel, a punishing drought that has left millions hungry, and deep disenchantment with the political elite, particularly among young voters.

In the presidential race, the deputy president and erstwhile heir apparent William Ruto, 55, is pitted against Raila Odinga, the 77-year-old veteran opposition leader now backed by Kenyatta after a stunning shift in political allegiances.

Analysts have in recent days suggested that Odinga, a onetime political prisoner and former prime minister who is making his fifth bid for the top job, could edge past his younger rival.

But if neither wins more than 50 percent of the vote, Kenya would be forced to hold a run-off for the first time in its history.

More than 22 million people have registered for the Kenyan elections. By Luis Tato (AFP)

Despite mudslinging and widespread disinformation, campaigning passed off largely peacefully in contrast to previous polls.

Pressure is now on the Independent Electoral and Boundaries Commission to ensure a free and fair vote in all six polls -- for the presidency as well as senators, governors, lawmakers, woman representatives and some 1,500 county officials.

But already, the election has run into some hitches, with six IEBC officials arrested on Monday and the commission suspending constituency or gubernatorial polls in several counties because of erroneous ballot papers.

IEBC head Wafula Chebukati vowed that the body would not hesitate to take "stern action" against any official flouting election laws.

"Let us collectively rise up and show the world that Kenya is a vibrant democracy."

Kenya's international partners are keenly watching the vote in a country considered a beacon of stability and democracy in a troubled region, with diplomats voicing cautious optimism it will pass off largely violence-free.

The election campaign was largely peaceful despite vitriolic mudslinging and disinformation. By SIMON MAINA (AFP/File)

Both Ruto and Odinga have called for a peaceful vote, but fears remain that if the losing candidate challenges the outcome -- as widely expected -- the discord could erupt into street fighting.

Security is tight, with more than 150,000 officers ready to ensure the safety of the polls.

The trauma of the 2007 election, which was followed by a horrific bout of politically motivated ethnic clashes that killed more than 1,100 people, still looms large.

And Odinga's challenge to the 2017 election result that saw then foe Kenyatta re-elected was met with a heavy-handed police response which left dozens dead.

The electoral body is under pressure to ensure a free and fair vote. By Yasuyoshi CHIBA (AFP)

The Supreme Court ordered a re-run of the 2017 vote, citing widespread irregularities in the counting process and mismanagement by the IEBC.

No presidential election outcome has gone uncontested since 2002, and there will be an anxious wait for this year's results which are not expected for several days.

With neither Ruto nor Odinga belonging to the dominant Kikuyu tribe, which has produced three of the country's four presidents, the election will open a new chapter in Kenya's history.

Ruto, whose party symbol is the wheelbarrow, has painted the election as a battle between the ordinary "hustlers" and the "dynasties" -- the Kenyatta and Odinga families that have dominated Kenyan politics since independence from Britain in 1963.

Some observers say economic pressures could compete with tribal allegiances as the key factor driving voter behaviour in a country where a third of the population lives in poverty.

Ruto says he is standing on behalf of ordinary 'hustlers' trying to make ends meet. By SIMON MAINA (AFP/File)

"The reshaped electoral chessboard means the outcome will probably come down to the degree to which Odinga and Ruto can muster support outside their respective bases," the International Crisis Group's East and Southern Africa analyst Meron Elias said in a note.

Lawyers David Mwaure and George Wajackoyah -- the latter an eccentric former spy who wants to legalise marijuana -- are also running but are likely to trail far behind the frontrunners.

If Odinga wins, his running mate Martha Karua would become deputy president, the first woman to hold the post.

Both candidates have vowed to get the economy back on its feet, rein in Kenya's mammoth $70 billion debt mountain and tackle the corruption that infects every level of society.

Already hit hard by the Covid pandemic that threw hundreds of thousands out of work, Kenyans are battling soaring inflation as the Ukraine war sends prices of basic necessities spiralling.

"I want them all (the politicians) to accept the election so the country can continue in peace," said Grace Kawira, a 32-year-old unemployed mother of two at Ruto's final campaign rally.