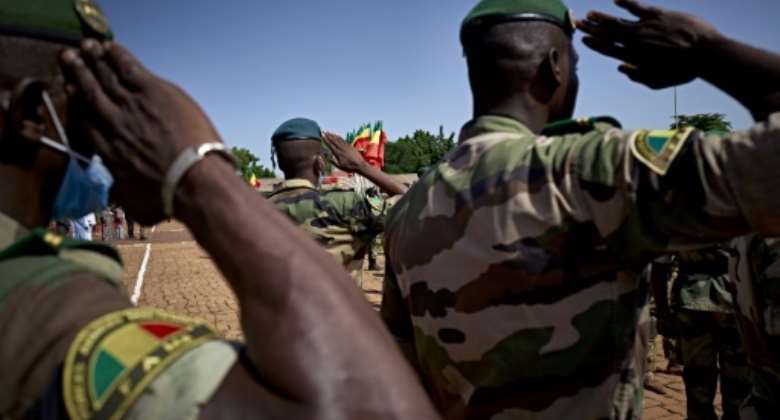 The Malian army has been struggling with a decade-long jihadist insurgency. By MICHELE CATTANI (AFP)

At least 17 soldiers and four civilians were killed Sunday in an attack in a strategic border zone between Mali, Burkina Faso and Niger, Mali's army said.

Some 22 troops were injured while nine other soldiers are missing, the army said late Monday, adding that the toll could still rise.

The army had blamed the attack on "terrorists" in an earlier announcement late Sunday, using the term it typically uses for jihadists.

The previous death toll was four soldiers and two civilians.

The army said Monday it killed seven from the attacking side, "likely" from the ISGS group, adding that there was "an unknown number of dead and injured carried away by the attackers".

It also said the attack caused damage to vehicles and residents' homes.

Tessit is located on the Malian side of the so-called three-border area in a vast gold-rich region beyond state control.

Like the whole of the zone, Tessit is even more isolated during the rainy season when heavy rainfall blocks access.

Armed groups under the umbrella of Al-Qaeda aligned jihadists Jama'at Nasr al-Islam wal Muslimin, or JNIM, are fighting ISGS there.

Thousands of residents have fled the area, many heading to the town of Gao, some 150 kilometres (90 miles) away.

The Malian army, which has a military camp next to the town of Tessit, has frequently been attacked in the area.

UN peacekeepers and, until a few months ago, French soldiers from Operation Barkhane, have also been deployed there.

In a separate incident, Barkhane on Sunday announced that it had "neutralised" a cadre and several jihadist fighters in the Talataye area, some 200 kilometres northeast of Gao, the day before.

Barkhane troops are currently preparing to exit their last base in Mali, in Gao, to redeploy to Niger after Mali's junta turned away from France and toward Russia in its fight against jihadism.

Also Sunday, five police officers were killed in an attack in Sona, in the Koutiala area of southern Mali near the border with Burkina Faso.

On Friday, suspected jihadists killed about 12 people in central Mali with explosives planted in the bodies of slain civilians that relatives had come to collect.

Mali is struggling with a long jihadist insurgency that has claimed thousands of lives and forced hundreds of thousands from their homes.

Violence that began in the north has spread to the centre and south of the country, as well as to neighbouring Burkina Faso and Niger.

Mali is also in the grip of political upheaval following military coups in August 2020 and May 2021.

Only a fool will think boos at Akufo-Addo was political mast...
15 minutes ago

My wealth exaggerated; it’s crass to define me by my wealth ...
50 minutes ago