Trial of 56 suspected IS fighters begins in Libya 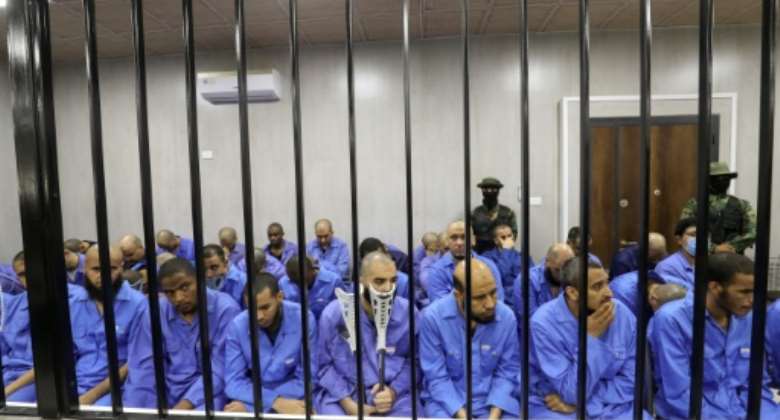 Suspected members of the Islamic State group sit in the dock during their trial in the western Libyan city of Misrata. By Mahmud Turkia (AFP)

The trial opened Monday in Libya's western city of Misrata of 56 suspected Islamic State group militants captured after the 2016 fall of its bastion Sirte.

The 56 suspects, out of a total of 320 facing trial, appeared in court before the trial was adjourned to September 25, judicial sources said.

The IS group captured the central city of Sirte in 2015, setting up a stronghold before being driven out the following year by forces loyal to the Tripoli-based Government of National Unity in power at the time.

The suspected jihadists face charges of "joining a terrorist group" and killing members of the GNA forces, said lawyer Lotfi Mohaychem, representing families of anti-IS fighters killed in the battle for Sirte.

The suspects appeared in the dock clad in blue prison overalls, some with their faces covered, in the crowded courtroom where dozens of the families had gathered.

Fatima al-Tlisi told AFP that her son was "still a high school student when he joined the forces" and was killed fighting IS.

Libya was plunged into over a decade of chaos and lawlessness following the 2011 NATO-backed uprising that led to the removal and killing of longtime dictator Moamer Kadhafi.

Dozens of militias and jihadist groups took advantage of the power vacuum, with IS setting up base in Sirte and the eastern town of Derna before being driven out with the help of US-led air strikes.