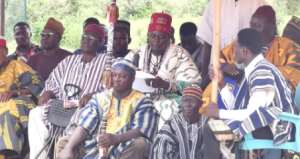 The Paramount Chief of the Navrongo Traditional Area, P3 Asagpaare Aneakwoa Balinia Adda II, has made a face-to-face appeal to President Akufo-Addo to complete the abandoned Navrongo sports stadium.

The Paramount Chief made the appeal on Friday, August 5, 2022, during President's one-day visit to the region.

The Chief started by thanking President Akufo-Addo for the numerous projects he and his government brought to Navrongo since his assumption of office.

"I want to thank you on behalf of the chief of the Upper East Region for the numerous development and projects you brought to us since you assumed office in 2017.

"Your Excellency the non-completion of the Youth Resource Center in Navrongo is a source of worry to many in the Municipality. I wish to use this platform to make a passionate appeal to you to complete the Resource Center.

"Your Excellency, the only team in the region that qualifies for the national in Division One is Mboma FC of which I am the patron. So, the completion of this Resource Center will serve as a befitting ground teams matches since the facility is a multi-purpose one," he stated.

Meanwhile, some angry residents told this reporter that “At the sod-cutting ceremony in July 2018, we were categorically told the project will be completed in nine months. In fact, the contractor promised to finish it in eight months and hand it over to us as a valentine’s gift. To wit, the project in normalcy should have been completed in 2019 even if it would face some delays."

However, there has been some debate of mistrust coming from some sections of residents of Navrongo who hold the view that President Akufo-Addo will not heed the appeal of their chief.