Prosecution or compensation? What Kenyan choices tell us about international justice 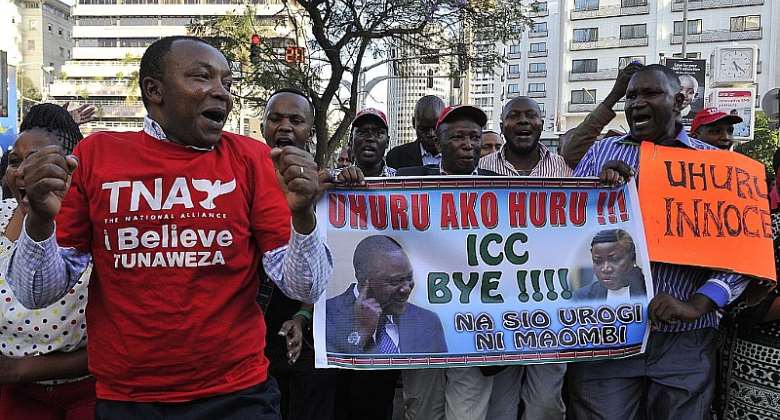 Supporters of Kenya&#39;s President Uhuru Kenyatta celebrate after the ICC dropped charges against him in 2014. - Source: Simon Maina/AFP via Getty Images

In December 2007, the Electoral Commission of Kenya announced that Mwai Kibaki had won a second five-year term as president. It was a surprising outcome, given his opponent, Raila Odinga, had held a significant early lead in the polls.

Kibaki was hastily sworn in, sparking inter-ethnic violence . Odinga's supporters, who were mostly from the Luo and Kalenjin ethnic groups, attacked Kibaki's Kikuyu supporters, which led to retaliatory clashes across the country.

This violence resulted in over 1,000 dead, more than 600,000 displaced and innumerable victims of sexual assault.

In 2010, the International Criminal Court (ICC) charged six prominent Kenyans with inciting the violence. According to the prosecution, William Ruto – at the time an Odinga supporter – instigated violence by rallying his Kalenjin co-ethnics to attack Kibaki's Kikuyu supporters.

The court alleged that Uhuru Kenyatta responded by mobilising his Kikuyu co-ethnics to attack those who purportedly backed Odinga.

To date, however, there have been no convictions. Evidentiary difficulties were primarily to blame. The ICC accused the Kenyan government of failing to cooperate in providing documentary evidence . The government also failed to protect witnesses . It was additionally accused of creating “a climate of fear”.

According to Kenyatta and Ruto, the collapse of the Kenya cases was a victory. They called the ICC an imperialistic institution that is biased against Africans.

Fatou Bensouda, a former prosecutor of the court, disagreed , lamenting the continued impunity and denial of justice for the many victims of post-election violence.

Read more: ICC case against Kenyan lawyer Gicheru: it matters, but not for victims of the violence

We set out to investigate whether the ICC's failure to secure convictions mattered to Kenyans. More broadly, we wanted to learn about the justice preferences of individuals in countries emerging from mass violence and human rights abuses.

Our research findings have two implications. First, despite years of campaigns against the ICC by Kenya's elected leadership, and little on-the-ground outreach from the court, it still has supporters in the country. Second, victims or witnesses to violence are less likely to buy into anti-ICC narratives. When denied justice locally, they may be willing to support the court's quest to deliver justice and accountability.

We conducted our research in Kenya in 2015. Our research team carried out face-to-face surveys of more than 500 Kenyans in five regions in the country where violence had occurred. Our results have been published over the last three years, most recently in a May 2022 paper .

We asked respondents whether they preferred prosecutions or compensation for the harms they or their fellow citizens had suffered during the 2007-2008 post-election violence.

Citizens may prefer both, but we phrased the question this way because in post-conflict situations, countries don't always have the resources to pursue every available justice mechanism. For those who preferred prosecutions, we asked whether they preferred that the alleged perpetrators be tried in Kenyan courts or at the ICC.

Read more: 20 years on, the International Criminal Court is doing more good than its critics claim

As far as we are aware, ours is the first study that asks Kenyans to choose between prosecution and compensation. It's also the first to consider how the option of ICC prosecutions might moderate preferences. Our study additionally collected data on ethnicity and on whether the respondent was exposed to post-election violence as a witness or victim.

Some researchers suggest that individuals' justice preferences will align with those of their ethnic leaders. This is because these are the people they turn to for material and other support. Other scholars theorise that people exposed to violence will prioritise psychological over material benefits. That is, they'll be pulled towards mechanisms that might hold abusers accountable.

We tested these theories using data we gathered when the ICC's case against Ruto was still pending.

Our findings remain relevant as the Kenyan post-election issue continues before the ICC. Lawyer Paul Gicheru is awaiting a decision on his trial after closing statements were made in June 2022. Gicheru has been accused of corruptly influencing witnesses in cases stemming from the 2007 election crisis – including the case against Ruto .

Our research found that first, most Kenyans didn't favour compensation over the retributive justice afforded by prosecutions.

Second, ethnicity generally played a role in respondents' preferences. Respondents who identified as Kikuyu or Kalenjin – Kenyatta's and Ruto's ethnicities, respectively – were less likely to support trials than Kenyans of other ethnicities.

Material self-interest may explain this finding. Respondents may believe they would benefit if their co-ethnics remained in power.

This result held for co-ethnics of Kenyatta and Ruto. Even though Kikuyus or Kalenjins generally had higher levels of support for compensation than those who identified as other ethnicities, victims who identified as either Kikuyu or Kalenjin decreased their support for compensation by about 11 percentage points (from 52% to 41%). Kikuyu or Kalenjin victims were also about 11 percentage points more likely than Kikuyus or Kalenjins who were not victims to support trials at the ICC over domestic trials.

In short, even though Kikuyu or Kalenjin individuals show higher levels of support for compensation than trials compared to other ethnic groups, exposure to violence has a similar impact across ethnicities: it increases support for trials and the ICC.

While Kenyatta and Ruto sought to discredit the international court after they were charged, our research found that witnesses of violence and victims were less likely than the average Kenyan to buy into this narrative.

Individuals who have encountered violence are more likely to prioritise “righting the wrong” even if it means their co-ethnics will be punished. They further demonstrate the key role the international court plays for victims of mass violence.

Read more: Al-Bashir and the ICC: is it worth getting your man, if you jeopardise your mission?

Many have criticised the court for, among other reasons, its paucity of convictions. However, our research shows that the court has an important role to play in providing justice for those for whom justice is denied domestically.

The ICC, however, can only deliver justice if countries cooperate with and support it. The outcome of the Kenya cases (so far) shows what happens when states fail to do their part: victims are denied their day in court.

Eamon T. Aloyo acknowledges funding for this research from The Hague Institute for Global Justice.

Geoff Dancy has received funding from the National Science Foundation and from Global Affairs Canada.

Yvonne M. Dutton acknowledges funding for this research from The Hague Institute for Global Justice.