Voice From A Tilapia Farm 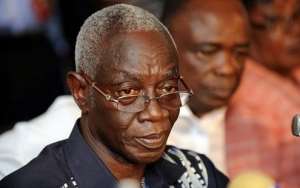 Taking it easy perhaps on his tilapia farm last week and puffing at a stick of cigarette, the brand of which we do not know, Dr. Kwadwo Afari-Gyan decided to make a headline which he did rather wobbly.

His angst against the continuous system of registration of eligible voters, one of the greatest feats in the history of election management in the country was unambiguous, in the article he presented on the subject of limiting the prerequisite of voters' identification to the Ghana Card.

He is palpably unhappy that someone else is taking the glory for the seismic feats the Electoral Commission (EC) is chalking with someone else at the helm.

The exultation at the thought of a Ghana without the bloodletting at registration centres is widespread among peace-loving citizens of this country.

It is a cost-saving means which we are surprised the man under whose watch the management of elections endured unenviable moments is not enthused about.

Under the watch of Dr. Afari-Gyan, many Ghanaians heard about pink sheets for the first time and how the mismanagement of these constituted the basis of electoral thievery.

Today, systems are working at the EC which makes it difficult for acts of election scandals to be undertaken on behalf of some interest groups.

We are constrained to put it to the one-time Chairman of the EC that he presided over rot at this critical midwife of governments in the country.

Nobody would be disenfranchised if they are bona fide citizens of this country and did not traverse our frontiers with the connivance of officialdom, for the purpose of registering as voters and partaking in the choice of our political leadership.

Today, the illegal movement of registration gadgets into Togo to have citizens of the Francophone country register and cross over during polls to vote, has become a thing of the past part of the baggage of the former EC Chairman.

Using the temporary challenges of acquiring the Ghana Card as excuse to widen the requirements and create avenues for scandals sounds pedantic and unconvincing. To think that this is originating from a man who once presided over the elections of the country triggers goose pimples. No wonder his tenure witnessed two bouts of litigation over election results one of which pushed the country to the precipice.

Even with the relatively paltry budget at their disposal, the EC is performing creditably well, feats which have been recognised internationally.

The Chairperson of the EC recently joined other respectable election managers for an assignment in Kenya.

Let the man concentrate on his cartoons and tilapia and allow the new management of elections to do their work as they deem fit.

The continuous registration and the Ghana Card as the lone prerequisite for acquiring a certificate to vote in elections in the country, is the way to go in a country with porous borders and politicians suffering a dearth of integrity.