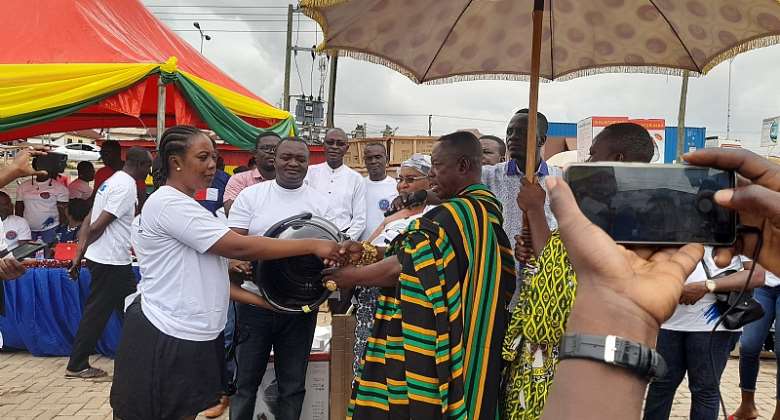 The Member of Parliament for the Oforikrom Constituency, Hon Dr Emmanuel Kwabena Marfo has donated industrial sewing machines and hand-dryers to young ladies who have acquired vocational skills to facilitate them earn a living.

The donation formed part of the MP's entrepreneurship initiative in the line with the government's promise of creating jobs in Ghana.

Making the presentation at the ceremony in the Oduom taxi rank, Dr Marfo said since he was given the mandate to represent the people of Oforikrom in Parliament.

He presented sewing machines, hand machines, sinks and hair dryers to 25 youths who have learnt dressmaking and hairdressing.

He donated Ghs10,000 to the university graduates who have set up businesses for a living.

Hon Dr Marfo noted that innovation has significantly improved the standard of living of people, indicating that, vocational training was one of the key pillars of his agenda in the Oforikrom constituency.

He, therefore, asserted that the creation of jobs was not about placing people in the formal sectors but developing their skills and talents to establish and create their own enterprises.

"This I believe is the number one major step I have taken to support in addressing unemployment issues in Ghana and also to take the young ladies off the streets," he stated.

He gave the assurance to sponsor the youth in the constituency to learn a vocation and equip them with the necessary start-up kits and "I am confident that, The 2nd phase of the Mp's entrepreneurship initiative would be undertaken and he's looking forward to assisting about 200 people," be stated.

Dr Kwabena Marfo respectively advised the beneficiaries to take good care of the machines and work judiciously to become entrepreneurs in their families and the society as well.

The Chief of Oduom Nana Osei Mensah III, who graced the ceremony commended the Oforikrom legislator for the kind gesture.

He advises the beneficiaries to make good use of the money they received.

He made this donation on the 4th of August 2022 to mark the Founders' Day celebration.