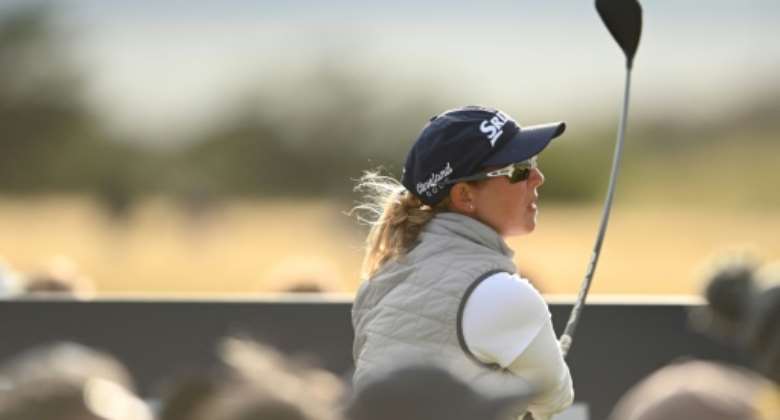 South Africa's Ashleigh Buhai survived a disastrous 15th hole to claim a "life-changing" victory in a marathon play-off against Chun In-gee in the Women's British Open at Muirfield on Sunday.

Both players tied on 10 under par after 72 holes, and, in near total darkness, it was Buhai who eventually secured the final major of the season with a par four at the fourth extra hole, the 18th.

Chun bunkered her drive and took five, while Buhai got up and down from a greenside bunker, holing out from two feet for victory.

She was close to tears as husband David rushed onto the green and gave her a kiss and a loving hug.

"It's been a lot of hard work over many years," said the 33-year-old, who won the first of three South African Amateur titles when she was just 14.

Her professional career has never quite hit the same heights with three wins in Europe and two South African Opens. But she had never won an LPGA title until now, and a major at that to make it even more special.

Five ahead overnight, she had to survive a triple-bogey seven at the 15th - that dragged her back into a tie with Chun - before snatching the dramatic play-off win.

"I'm very proud of myself," she continued. "I had to dig deep. But I was surprisingly calm in the play-off. Just tried to stay in the moment.

Ashleigh Buhai gets a warm embrace from husband David. By Neil Hanna (AFP)

"Before I hit the bunker shot in the play-off, my caddie (Tanya Paterson) said 'show them why you are ranked No.1 in bunkers this year'. It was great to do it."

Gary Player (1959) and Ernie Els (2002), Buhai's hero growing up, are South African winners of the Open Championship at Muirfield.

"I am so proud to join them as major winners at Muirfield," Buhai continued.

"It really is going to be life-changing."

Chun was magnanimous in defeat.

The winner of three majors, including this year's Women's PGA Championship, said: "I never gave up, and gave it may all."

The 27-year-old Korean added: "Ashleigh played a brilliant bunker shot and she deserved it. I am very happy for her."

Buhai had looked in total control when she led by three shots with just four to play.

But she drove into a bunker at the 15th, hit out sideways into rough and then moved the ball just a few yards with her third shot on the way to a triple-bogey seven.

Now tied for the lead, she did well to par the final three holes for a 75 that matched Chun's 10-under par total. The Korean closed with a round of 70.

Japan's Hinako Shibuno, the 2019 winner, finished third on nine under after a final round 71.

American teenager Rose Zhang won the Smyth Salver for the leading amateur. She closed with a 73 for one over par.