By By reporter
General News 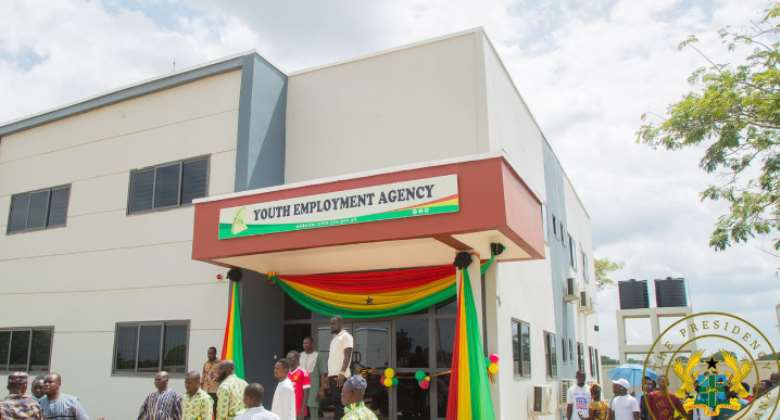 President Nana Addo Dankwa Akufo-Addo, together with the Deputy CEO of the Youth Employment Agency, Alhaji Ibrahim Bashiru and a number of ministers has commissioned the newly built multi purpose North East Regional Office of the Agency. This was to aid the new Regional Headquarters of the Agency in the North East Region begin full operations and in line with the president's vision of Job Creation, decentralisation and infrastructural development, actualize equitable implementation of the One Million Jobs Agenda.

President Akufo-Addo, who on the occasion also commissioned another newly built magnificent edifice to serve as the Administrative head of the North East Region was elated at how infrustructure is speedily coming to the Region, premised on his response to traditional authorities and the people of Ghana to create new Regions, Municipalities and Districts.

Speaking at a brief ceremony to mark the commissioning, President Akufo-Addo called on all and sundry to support the Employment Agenda of his government in every diverse way possible, an initiative he believes will continue to instill peace in the Region and Ghana and also bring about development.

Alhaji Ibrahim Bashiru, Deputy CEO in charge of Operations at the Youth Employment Agency acting on behalf of the CEO, Lawyer Justin Frimpong Kodua thanked the president for his Resourcefulness and Support for the Agency since 2017.

Alhaji Ibrahim Bashiru explained the realisation of a massive deficiency which really impeded the operations and effective implementation of modules of the Agency that had been infested with corruption in the previous years. "Management took a bold decision of revamping and reforming the Agency into an enviable one, a result of which we are experiencing today", he said.

According to Mr Bashiru, two of such Regional offices have been completed and/or commissioned in the Oti, Western North and Ahafo Regions. Several others are at various stages of completion in other Regions and Districts. He explained that all of these are intended to bring life to the Agency's innovative programmes like the Agric-based Flagship projects, YEA Jobcentre, Artisan Directory, CHWS etc.

Mr Bashiru further assured the president and the entire country of consistent hardwork and innovation to bring more development and create more jobs for the youth of Ghaana.

North East Regional Director of the Youth Employment Agency Nurudeen Mohammed was particularly thankful to the president, CEO Lawyer Kodua Frimpong and Deputy CEO Ibrahim Bashiru for the immense support and bringing the Agency closer to the people.