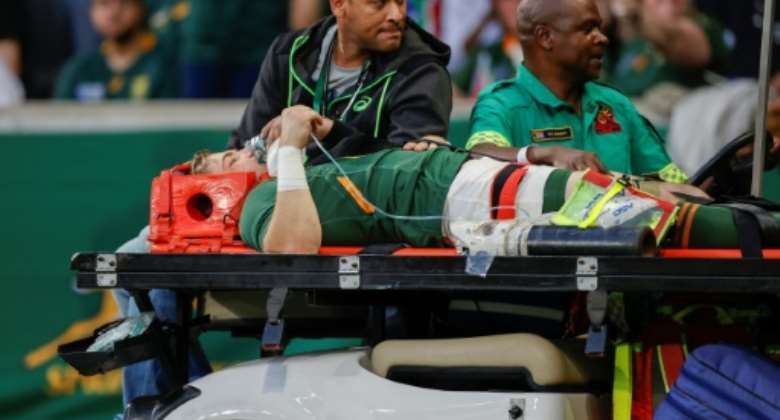 South Africa scrum-half Faf de Klerk is taken off on a stretcher after being injured during the Rugby Championship match against New Zealand in Mbombela on August 6, 2022.. By PHILL MAGAKOE (AFP)

South Africa scrum-half Faf de Klerk and wing Kurt-Lee Arendse were due to have medical assessments on Sunday after both suffered head injuries during a 26-10 win over New Zealand in the opening Rugby Championship match.

"The team will undergo medicals today and we should have an update tomorrow," said a team spokesperson.

The Springboks play the All Blacks again this Saturday in Johannesburg, but both World Cup winner De Klerk and newcomer Arendse are doubts.

De Klerk required lengthy treatment on the field after being knocked unconscious when his head collided with All Blacks wing Caleb Clarke's knee just 43 seconds into the match in Mbombela on Saturday.

He failed a concussion test, which meant he could not return to the field, but emerged from the dressing room midway through the first half and waved to an applauding crowd before joining the Springboks bench.

Coach Jacques Nienaber had high praise for Jaden Hendrickse, who replaced De Klerk and had an outstanding match.

"I thought Jaden stepped up well," said Nienaber. "We backed Jaden in the last Test match against Wales (in July) and he wasn't nervous at all when he came on."

Nienaber said he was not sure whether De Klerk would be fit for the Johannesburg Test.

"We're fortunate that we have quality scrum-halves with players like Faf, Jaden, Cobus Reinach, Herschel Jantjies and Grant Williams. There's a lot of competition in the squad."

Slightly-built Arendse, playing only his second Test, proved a worthy replacement for the injured Cheslin Kolbe, scoring a try and showing courage in contesting high kicks and his tackling of much bigger opponents, including opposite number Clarke.

But Arendse misjudged an aerial challenge with Beauden Barrett late in the match, knocking himself out, causing Barrett to fall awkwardly and receiving a red card while being treated.

Nienaber said that if Arendse was ruled out by suspension or injury, a replacement would come from within the squad, with Jesse Kriel or Warrick Gelant able to take his place.

"We have options," said Nienaber.