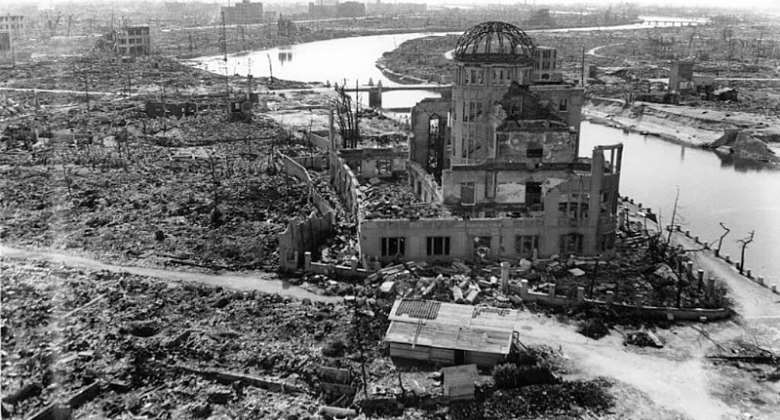 UN Secretary-General Antonio Gutteres warned world leaders on Saturday they were playing with a loaded gun and urged them to back away from the brink of nuclear armageddon.

Speaking in Hiroshima on the 77th anniversary of an American war plane dropping an atomic bomb on the Japanese city, Gutteres told the thousands who had gathered at the Peace Park: "Tens of thousands of people were killed at once in this city. Women, children and men were incinerated in a hellish fire.

"Buildings turned to dust. Survivors have been cursed with a radioactive legacy. We must ask ourselves: what have we learned from the mushroom cloud that swelled over this city?"

Gutteres' plea came hours after the Zaporizhzhia plant in south-eastern Ukraine was shelled during fighting between Russian and Ukrainian forces.

"Crises with nuclear overtones are spreading rapidly, from the Middle East to the Korean peninsula to Russia's invasion of Ukraine," Gutteres added.

"Humanity is playing with a loaded gun."
Moment
Earlier bells tolled in Hiroshima as the city marked the deployment of a bomb nicknamed Little Boy from the B-29 Enola Gay.

The strike on Hiroshima and its aftermath is estimated to have killed 140,000 people.

On 9 August, the Japanese city of Nagasak was also bombed in a strike which killed more than 75,000 people. Japan surrendered six days later ending the second world war.

Since Russia's president Vladimir Putin ordered his forces into Ukraine on 24 February, he has raised the possibility of a nuclear strike.

As a result of the conflict, the Russian ambassador was not invited to the commemoration service in Hiroshima.

Idea
The city's mayor, Kazumi Matsui, told the crowd at the commemoration: "In invading Ukraine, the Russian leader, elected to protect the lives and property of his people, is using them as instruments of war, stealing the lives and livelihoods of civilians in a different country," Matsui said.

"Around the world, the notion that peace depends on nuclear deterrence gains momentum," Matsui added.

"These errors betray humanity's determination, born of our experiences of war, to achieve a peaceful world free from nuclear weapons.

"To accept the status quo and abandon the ideal of peace maintained without military force is to threaten the very survival of the human race."

Akufo-Addo angry, dissatisfied over slow pace of work on Bol...
6 minutes ago