The Long Struggle Of A Christian Governor, His People, The Founding Of A Security Self-Help Outfit Against Fulani Islamic Terrorism In NIgeria 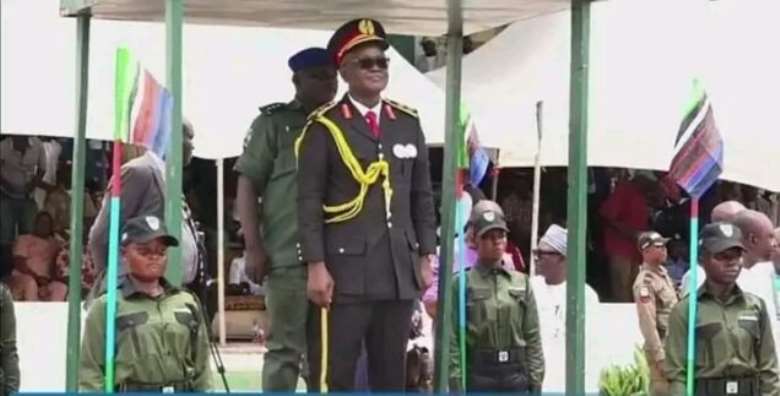 Samuel Ortom, Governor, and Commander-in-Chief of the Community Volunteer Guards of the Benue State of Nigeria

The Catholic World News of July 22, 2022, showed the following headline, "In 2 months, 68 Christians are killed in Nigeria’s Benue State," notably by Fulani jihadist militia, which should worry all.

This state security move to protect the Benue people and their property is happening following the National Security Adviser (NSA) to the President, retired Major General Babagana Monguno, statement to the press that due to the current failing ways of the Buhari regime to curb the nationwide violence and insecurity, "people are getting tired and are beginning to gravitate towards other means of self-help." Ortom has taken them up on that self-help.

The worry of Ortom, who certainly is not focusing on Buhari on a personal level but worries that in a Fulani-led federal government by a president with peculiar characteristics of lack of vision, incompetence, a pusher of ethno-religious politics and divisions, apparent complacency, and complicity, the emotional distress of his people grows as the killings of Benue citizens rise with the lack of decisive actions against the terrorist Fulani headsmen by Buhari.

As the Governor seeks democratic protection and security for his people from the alarming deaths and destruction by the militant Islamist Fulani herdsmen who go after people, he has opened a vigilante security outfit, the Community Volunteer Guards, for operations against the Islamic terrorists. But the Buhari regime must only see this as a move against terrorism in Benue and should not act in a complicit and cynical manner in order not to drive the country into civil war, beginning with Benue, a predominantly Christian state. The Biden administration and other powerful western allies should watch out for any extraordinary moves by the current Buhari-led government.

Benue State is predominantly Christian, where on one night in April this year, according to the US-based International Christian Centre (ICC), militants killed 14 Christians, including women and children, at midnight in the Tarka Local Government Area, close to the state capital of Makurdi.

In 2021, Nigeria earned the distinction of being the worst country for Christian persecution in the ICC’s 2021 Persecutor of the Year Awards. Extremists and armed militants have killed tens of thousands of Christians and left more than 3 million displaced in a 20-year genocide against them.

"Christian communities in the Middle Belt region of Nigeria have effectively suffered a 20-year genocide," stated ICC President Jeff King. "Where is any action? The Nigerian government gives these attacks lip service without any meaningful response. Where is the outcry? Where is effective action? In Nigeria, the military, the police, and the intelligence agencies are all controlled by Muslims."

Psychologically and socially, the reality is that Nigeria's leadership is being controlled by predominantly Fulani Muslim security and law enforcement leaders. In the face of that imagery, the militants see themselves as also in strength, especially with them openly carrying AK47s and other dangerous weapons for killing purposes.

While I am not sure if the Benue security forces are seeking weapons from the American government on humanitarian grounds, as in the case of Ukraine without direct military intervention, the Biden administration and the international community can also provide some form of security aid and assistance in the form of equipment such as tactical vehicles, counter-battery systems, multipurpose wheeled vehicles, body shields and helmets; solid and fast motorcycles, night light systems, bush surveillance sensors; coastal security systems; coastal and riverine patrol boats; secure communications systems; and optics. Medical supplies are needed, as is funding for training, maintenance, and sustainment.

It is important to know that these Islamic militants like Boko Haram, which in the Hausa language means "Western education is sinful", and their sister terror groups are loosely modelled on the Taliban movement and ways in Afghanistan.

These Islamic militants boldly operate in the daytime and generally at night. These terrorist groups have carried out daily attacks on civilians by way of kidnappings, assassinations, suicide bombings, and hit-and-run raids.

As Nigeria has one of the highest rates of kidnapping-for-ransom in the world, even when paid, they sometimes still kill the victim and continue to engage in abduction and target expressways, railways, farms, churches, and villages.

Not long ago, the priest of St. Paul’s Catholic Church, Aye-Tuwar village, Agu Centre in Kastina-Ala Local Government Area of Benue State, Rev. Fr. Ferdinand Ngugban, and three worshippers were reportedly killed by armed men suspected to be militia. The Vatican News recently reported that at least 68 Christians have been killed, with many more abducted or displaced in the last couple of months in Benue State.

In what was termed a "black Tuesday", just like the black Tuesday of the Lekki massacre, in Gwer East local government area of Benue state, armed Fulani herdsmen vandalized the church, killing two priests and 17 worshipers. Amongst the victims were two Rev Fathers whose names were given as: Rev Fathers Joseph Gor and Felix Tyolaha; two primary school headmasters, Peter Dick and Ape Chia; also, a secondary school principal; and fourteen other worshipers. The victims had gone to morning mass at St. Ignatius Quasi Parish when their attackers, who had laid an ambush on the community, lunged on them very early in the morning.

Not satisfied, the herdsmen militia continued their horror to other villagers, burning their houses, numbering about 100.

It was gathered that the whole community was destroyed by invading bandits who had a field day unleashing terror on the sleepy community.

These attacks, mostly by terrorist Fulani herdsmen/Jihadists, are occurring throughout the country, but Benue, for all intents and purposes, a predominantly Christian community, has been a target of the Jihadists who, according to history, have always wanted to conquer Benue and the Tiv people who have resisted their advance since 1804, for one main reason: they rejected Islam and chose to follow their own faith, particularly Christianity.

Many people are asking the international community including the Biden administration to help over the massacre of Benue citizens, and one way to do this is assist the Benue people, with security capabilities, medical supplies, protective gear, and humanitarian aid.

As it is, Russia could not stop the United States, the international and corporate organizations, and the UN from delivering much-needed humanitarian assistance as well as food, water, medicine, shelter, and other aid as well as security assistance support. Certainly, Buhari will not be able to stop the U.S. and U.N. from providing humanitarian aid to many displaced Benue indigenes and providing the Community Volunteer Guards (CVG) with security assistance support.

On a voluntary basis, I am open to how to use police science, psychological science, and community support to guide state-level authorities, including Benue State, regarding vigilante security training and consultation with a focus on ethical and psychological readiness, first aid, human rights, and promoting harmony and security in lives.