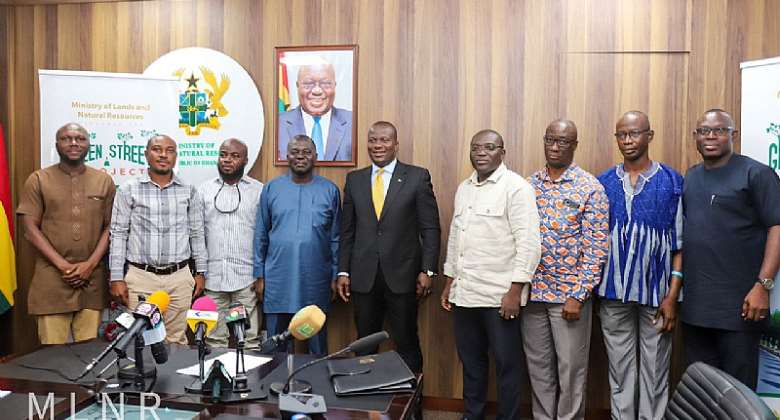 The Ministry for Lands and Natural Resources has inaugurated a committee to oversee the Green Street Project.

The Green Ghana Project is the government’s response to the devasting effects of climate change. It is aimed at restoring the country’s lost forest cover and contributing to global efforts at halting climate change.

Inaugurating the committee on Tuesday in Accra, Mr Samuel Abu Jinapor, Minister for Lands and Natural Resources said the government was committed to a greener, cleaner and beautiful environment that contributes to achieving Sustainable Development Goal 11 (building sustainable cities and communities), and Goal 13 (combating climate change).

He stated that the prevailing climatic conditions globally and the government’s bid to beautify the nation’s cities and towns necessitated the birth of the project.

Mr Jinapor charged the committee with the responsibility of identifying principal streets and avenues in the cities where trees would be planted, picking out resilient and fast-growing tree species to be planted in each of the regional capitals, developing detailed strategies, work plans and budget for the project, including plans for nurturing and protecting the trees planted.

According to the Minister, the Green Street Project would concentrate on the growth of trees to enhance the beauty of cities and towns.

Mr Jinapor disclosed that the first phase of the project would see the planting of selected trees on principal streets in Accra, Kumasi, Tamale and Sekondi-Takoradi before being extended to the other regional capitals.

On his part, the Deputy Minister of Local Government, Mr Martin Adjei-Mensah Korsah, who is a co-chair of the committee, said the partnership among Ministries, Departments and Agencies involved in the project was an indication of the willingness of the government institutions to work together for the development of the country.

The committee is co-chaired by the Deputy Minister of Lands and Natural Resources responsible for Forestry and the Deputy Minister of Local Government, Decentralization and Rural Development and draws members from the Ministry of Lands and Natural Resources, Ministry of Local Government and Decentralization, Ministry of Roads and Highways, Forestry Commission, Department of Urban Roads, Ghana Highway Authority, Department of Parks and Gardens, Zoomlion Ghana Limited and Mullen Lowe.