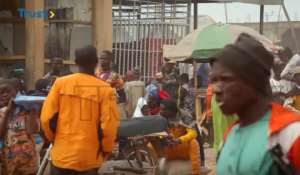 Abuja, August, 5, 2022 – Nigerian authorities should immediately drop the fines recently issued to four media outlets, and should ensure that the press can work freely, the Committee to Protect Journalists said Friday.

On Wednesday, August 3, the National Broadcasting Commission regulator announced on its Facebook page that it had issued fines of 5 million naira (US$11,984) to the privately owned broadcasters Trust-TV, Multichoice Nigeria Limited, and TelCom Satellite Limited, as well as NTA-Startimes Limited, which is affiliated with the state-owned National Television Authority.

The fines came one week after Nigeria’s information minister, Lai Mohammed, accused Trust-TV and the BBC of “glorification of terrorism and banditry” in the country, and said they would face penalties, according to reports.

The regulator’s press release said the outlets are required to pay the fines by August 30 or face harsher sanctions.

The regulator sanctioned Trust-TV over a March 3 documentary, “Nigeria’s banditry: The Inside Story,” and fined the other three outlets for airing a July 28 documentary by the BBC Africa Eye program, “Bandit Warlords of Zamfara,” according to the regulator’s press release, signed by the commission’s director general, Balarabe Shehu Ilelah.

The Trust-TV documentary, which aired on its YouTube Channel, included interviews with masked gun-wielding people, locally referred to as “bandits,” who explained their reasons for joining armed gangs, as well as the possibility of them giving up arms and leaving the groups if the government would negotiate with them.

The BBC documentary also included interviews with prominent bandits in Northern Zamfara state, some of whom are wanted by the Nigerian police.

In its press release on Facebook, the broadcasting commission alleged that the outlets violated sections of the broadcasting code by inciting crime that could “lead to public disorder or hate,” transmitting a program likely to incite violence or panic, and failing to depict “law and order” as “socially superior” to “crime or anarchy.”

In a statement reacting to the fines, Trust-TV said it would study the issue, adding that they believe they were acting “in public interest by shedding light on the thorny issues of banditry and how it is affecting citizens.”

Trust-TV Chief Operating Officer Ibrahim Shehu Adamu told CPJ by phone that the fines would “cripple” the broadcaster, which began operating less than a year ago.

“If we are to take that lump sum and pay as fine…we will not be able to operate,” he told CPJ, adding, “If this fine is allowed to go, we have to think twice before we are able to do such big investigations in the future.”

CPJ also called Mohammed, the information minister, for comment but he did not answer.