Keys to understand the Decision of Spain why? And who is behind?

Since last Friday 17th of March there is a huge numerous shoots the reactions that has unleashed however the Majority of the mentioned reactions were coincided amid of the critic in the main and into the form. The debate has served and already there is who reads this news in the World’s key, and investigating the connections of this announced with the International Geopolitical Alliances with regard of the Ukraine Crisis.

The solution for the Conflict:

how can achieve? Through policy or via International Law? First Question we need to know the linkage of this movement, which is cannot be doubt the policy impact, if the Western Sahara Dispute solution can be brought through the policy backed International Law. Since that Public shutting taker of Pedro Sanchez Party, has been much of what has signalizing the coherence to defender the International Law and the National Sovereignty of Ukraine. However the most equal we must implement when D.Tump announced the recognition of Morocco Sovereignty over Western Sahara Territory, is necessary to remind what had happened of the Interrelate between the policy and the International Law, this pronouncement not changed the Nature of the Conflict nor its solution. Hence, is wanted to allude the fundamental aspects that determining the applicable jurisdiction way for the Resolution of the Dispute: the naturalized of the Territory, the legitimacy representation of the Population legal Framework should applicable for its Resolution and the role of Spain. The Territory of Western Sahara is non-Autonomy, furthermore, beneath the Resolutions of the United Nation ( R.2625(xxv) of the General Assembly of the United Nation approved 24th of October 1970) its Nature solely changing when “ the People of the Colonial or the non- Autonomy Territory been exercised its right of Liberty Self-determination into Conformity with the United Nation charter and, in particular, into its purposes and Principles “(p.174). This naturalize has been reiterated by part of Lawyer Adviser of the United Nation, Hns Corell ( S/2002/161), for Example, or in the different Sentences of the European Tribunals the String of the

Legality of the exploitation of the Territory’s Natural Resources. This Territory’s naturalize also defined the main Status of the Parties and concretely the Nature of the Morocco presence in the Territory such an Occupation (see Resolutions R UNSC 377/1975 and R UNGA 34/37 of 1979 and our previous analysis).Its also the same sentences made clear that the legitimate represent of Saharawi People is the Frene Polisario (Sentence of TG of 29th of September 2021) and , therefore any Decision could affecting the welfare of the Saharawi People, to manage Its own Natural Resources or to the Termination of Property own future must be checking through consultation Legitimacy Representative.Given the naturalize of the Territory and the Status of the Parties there is no place to other Frame for a Resolution to the Conflict what can establish International Law and the Resolutions of the United Nation, and this done by realization of the Right of Self- determination of the Saharawi People. however, not support to clarify this Frame the laxity of the use a language for part of the own UNO, what has did modified her formulation for the Solution to the Conflict through the embark absolute on the Self-determination(See, for Example, the Resolution 621 of 1988), to the searching of an (( policy Solution would be mutually acceptable)) for Example, the Resolution 1541 of 29th Abril 2004 ) or the Appeal to an “ policy Process under its Headlines of the Spokesmen of the UN, Stephen Dujaric, in his reaction on the Spanish Government change. Finally, the jurisdiction condition of the Territory making also the naturalized of Spain like Administrative Potential for the Territory, although the Spanish different Governments have treated disengagement of their responsibility.

Wall of Western Sahara, has constructed to split in 1980 with Sand, Stones and protected by Landmines, with an extension superior to the 2.720 Kilometres and an Stocking of 3 Meters of the height, what divided the Western Sahara and the Southwest of the Morocco, separate like this Areas is controlling by Polisario and Called Liberation Area (AFP PHOTO/ PATRICK HERTZOG)

A Betrayal new or a new Treason?

Having in mind the fundamental applicable jurisdictions, which is the real repercussion of the Announcement of the President Sanchez? The Polisario remembers what this positioning no changing the Status of the Territory nor the responsibility of Spain, while what there who confirms what this Announcement no supposed change, already what the betrayed of the PSOE had back to the Period of Felipe Gonzalez.Even though is true what the Socialist Party does what is align with the Morocco Proposal nevertheless until now herself realizing an Official Procedure what controversially the traditional “active neutrality” of the Spanish position or posture. Therefore many of the Criticizes were leading to the form in what has realized this change, without informing partners of the Government and those in Coalition, neither the Opposition, nor the Citizenries. The criticizes more warm solely reproaching Mr Pedro Sanchez the form in the what he himself Communique this Decision, claiming what, given its Draft, should have been Communique of a form consensual and transparency, and not like reaction to the Publication of the massive for Morocco side. However, like those positions ignored what that this change of course, then of controversial the Historic positioning of the Spain’s Foreign policy and the already mentioned bases for International Law, contradicts the proper electoral Program for Socialist Party of 2019, (what in its page 286 vowed respect the principal of Self-determination for Saharawi People), of the what bases on its own voters should also reclaiming explications, not only in the form, but in the bottom.

Like this Issues, if asking for what this change and why right now, when more necessary is narrow the ties with Algeria, historically for the Saharawi People. While what the Official argument that detaches of the fragments filtered of the massive and of the Declarations of some Members for the Party appoint to the needs to close the Diplomatic Crises which Morocco, is necessary to analyze the Global of repercussion of this Decision for understand if responding to an strategy of National policy or to Alliance International

Strategies. In first place, is necessary to recording what Morocco recognizes what the origin of this Diplomatic was not for the hospitalized the Frente polisario leader Mr Brahim Ghali, but for the Spain’s positioning after the Announce of Trump of the recognition of the Sovereignty on the Territory. In this Key Note , the Decision adopted for the Government of Pedro Sanchez would suppose an Assignment to the Morocco Blackmail for initiating other Crisis with Algeria, who ensures not have been informed this swerve.In addition, after the position is recrimination the Government what does not know and there is no Information had been given to the Parliament house about this change and even their Partners in the Government have ordered the appearance of the President to give explications of this change.

The President of Spanish Government, Mr Pedro Sanchez, and the President of the French Republic, Mr Emmanuel Macron, during his appearance before the Maiden of Communication after Meeting in the Palace of the Eliseo (Paris) this Monday 21st March. Photo: Pool Moncloa/Fernando Calvo.

The hands what moves the Strings:

However, already there is who sees this turn an interest what goes beyond on an attempt for solve a bilateral Crisis, and change that responds to Geopolitical interests more specious. In first place, result difficult to unlink any actual decision of the Ukrainian crisis. Not in vain, is good reminding what Morocco herself abstained in the voting against Russia en the General Assembly, conscious of the relation of Algeria and of the Paper of the Asian Countries in the Region. Other voices noticed to what Spain goes on like this the steps of EE,UU, and of Germany for defreeze the relation with Morocco and Reinforcement like this alliance with who understanding what is an ally key in the Region.

Deserves the penalty signal what also in the Case of Germany went Morocco the filter an massive of the recently elected chancellor for accounting of the what understood like an backrest to his plan of autonomy, to despite the fact that Germany affirmed not having Varied her Official posture with respect to the Conflict. That which result difficult of understand, in any Case, is the moment elected for this change of posture, when the Alliance with Algeria is strategy in the Energy Crisis across Europe. Anti these interrogates is logic wonder who is the principal driven of this Measure, and all points in two Directions: EE.UU. And France. Both Countries have clear interests in the Region, and isn’t the first time that the Conflict in Western Sahara sneaks into Keys Geopolitics of the Zone and especially in the repercussion of the relations of EE.UU., Russia and Ukraine. On the other hand, France, is the principal defender of the Morocco posture, and the synergy between the Spanish Government of Pedro Sanchez and the President Macron was evident in the Meeting of the past 15 of March, just before the Announce of this posture. 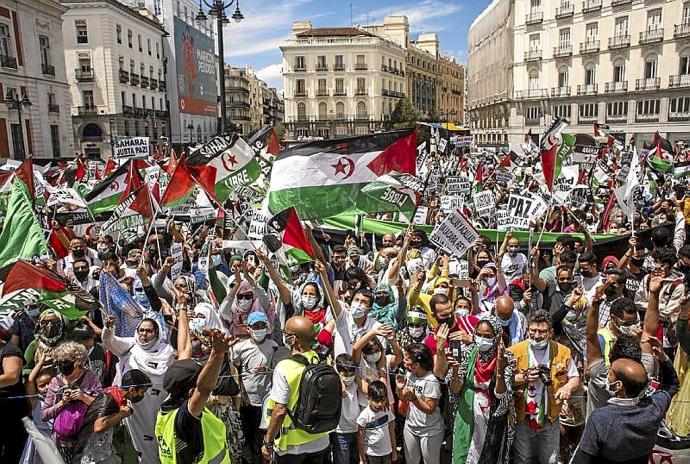 Manifestation for the freedom of the Saharawi people in Madrid in January of 2021 (Photo: EP)

Message to the Saharawi people:

There is no doubt of what is this situation gives a clear Message to the Saharawi People and to Frente Polisario. In first place, is evident that not all the Wars are the same and what the policy repercussion and Social of the Conflicts this conditioned by questions like the Race and the Cultural proximity, and above all, by the Economic interests. The bid of the Saharawi People for an pacific solution to an Conflict that had been lasted more than 46 years solely has taken them to ostracize and mediate blockade, broken unique when the violent has escalation in the territory. Like this is difficult that the bet by the peace is

Maintained, above all among the Saharawi more Youngers generation. On the other hand, the incoherence in the Application of International Law took the Saharawi people to disloyalty and mistrusting of the International Community, what have seen like Morocco violates the Law of form recurring and even the owns signed Contracts without any repercussion nor legally or politically. And finally, the 3rd Message what this situation sent to the Saharawi People, what is not can be confidentially in the Spanish policy Class. To differentiation of others Countries like Portugal, that they did of the Decolonization of the East Timor this an bet National until what is solved in Conflict with Indonesia, all the Spanish political Parties has been Characterized for defender an posture in around to Western Sahara since the Opposition and the vice versa since the government. Despite of the critics of their Allies of Government and of the Parties what facilitating the investiture in parliament headquarter? And like said the recently Deceased Despond tutu:” if you neutralized in situations of injustice you choose the side of the Oppressor”. Seems clear that each times are more the aligned the side of the Oppressor and only subtraction see like the People’s backlash oppressed.