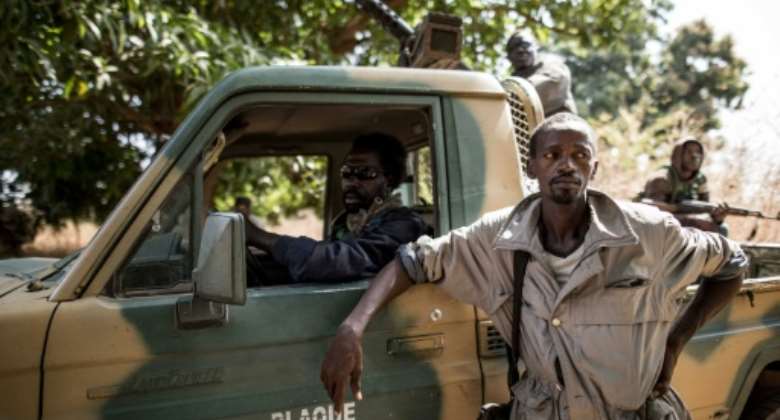 Separatists belonging to the Movement of Democratic Forces of Casamance (MFDC) during the release of captured Senegalese soldiers in The Gambia in February. By MUHAMADOU BITTAYE (AFP)

The peace deal Senegal has signed with rebels from the country's south is "an important step" towards permanent peace in the home of one of Africa's oldest active rebellions, a mediator said Friday.

Rebel leader Cesar Atoute Badiate, head of a unit of the Movement of Democratic Forces of Casamance (MFDC), and an emissary of Senegalese President Macky Sall signed the peace deal in Guinea-Bissau on Thursday.

The rebels pledged to lay down their arms in the nearly 40-year-old conflict in the Casamance region.

"For nearly four years, the MFDC has said it would lay down its arms but had never signed it," the head of the Reflection Group for Peace in Casamance added.

The agreement, the content of which was not disclosed, was reached following mediation by Guinea-Bissau's head of state, Umaro Sissoco Embalo, who is also the chairman of the Economic Community of West African States (ECOWAS).

Rebel leader Badiate was in June sentenced in absentia in Ziguinchor, the main city in Casamance, to life in prison for murder and armed insurrection in connection with the January 2018 massacre of 14 men in the region.

"It is to be hoped that the whole MFDC will be able to join" this agreement, Sagna said on Friday, referring to the group's various political and military branches.

Senegalese President Sall -- who had made a "definitive peace" in the Casamance region one of the priorities of his second term -- said on Twitter that he welcomed the peace agreement and remained "committed to the consolidation of lasting peace in Casamance".

Casamance, Senegal's southernmost region, is almost separated from the rest of the country by the tiny state of The Gambia.

It has a distinct culture and language derived from its past as a former Portuguese colony.

The MFDC has led a low-intensity separatist campaign since 1982 that has claimed several thousand lives.

But the conflict was mostly dormant until Senegal launched a major offensive last year to drive out the rebels.

In a clash on January 24, four Senegalese soldiers were killed and seven were captured alive and taken across the border to The Gambia. The rebels released the hostages the following month.

In March, the army launched a new operation in which it claimed to have destroyed several rebel bases for the loss of one soldier and eight wounded.