The equal split of parliamentary seats a clarion call, warning to politicians — Kufuor 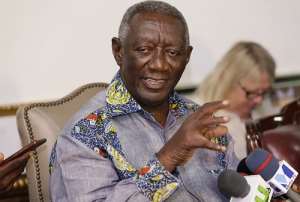 The independent candidate from Fomena, Andrew Asiamah Amoako decided to swing to the NPP making the Majority in Parliament.

This, ex-President John Agyekum Kufuor said hung parliament is a clarion call by the citizen for effective leadership.

Modernghana monitored his recorded interview, which was aired on Thursday, August 4 on the Ghana Tonight show, in which the statesman added that it also means Ghanaians have accepted democracy.

“I believe it is a clarion call to us to appreciate that people will change their voting patterns within just a short space of four years.

“People who went in voting massively for one party and then within four years, they seem to be reversing their opinion. I felt that was democracy at work and it should be a warning to those of us who would offer ourselves to be considered by the people,” the former President noted.

He continues “Truly, I believe the real sovereignty is in the people, they are the sovereign authority with the right to choose who should lead and right to also withdraw their selection. What happened should be taken as a serious thing to aspiring politicians, that if you want to lead the people, understand them, be on their right side, you shouldn’t underrate the populace or the electors. Lincoln once said you can fool some of the people sometime but not always, the day of reckoning will come and then they will throw you out.”