The Life And Times Of JJ Rawlings – Part 2 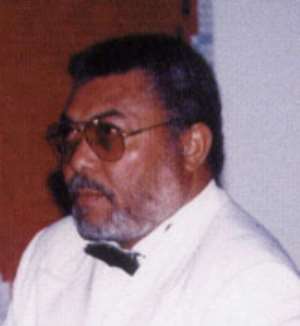 In the wake of the G-8 Summit in Gleneagles, Scotland, his Tyrannical Eminence, Flt.-Lt. Jeremiah John Rawlings, had the impudent temerity to subject the economic agenda of the world's wealthiest and most powerful leaders to scrutiny. In a largely desultory one-and-half-page article, Ghana's longtime tyrant and mass murderer alluded to the recent subway and bus bombings in London by some young British-born terrorists of Asian descent. “The atrocity inevitably diverted the attention of participants and [the general] public, and it is impossible to know what the G-8 [Summit] would have produced had the shocking events of July 7 not occurred,” wrote the 57-year-old former Air Force pilot and career coup-plotter.

Needless to say, the preceding quote which formed a part of the aforementioned article, which was originally published in Britain's Guardian newspaper – at least that was how Ghanaweb.com sourced it – is patently condescending and outright sophomoric. First of all, it presumes the intellectual and moral levity of the G-8 leaders by facilely suggesting that the mere occurrence of the terrorist carnage had unreservedly eviscerated any iota or modicum of conviction from the collective agenda of these progressive – and we must significantly add “Democratic” – leaders. In reality, as evidenced by passionate and convicted statements from Prime Minister Tony Blair, of Great Britain, the Chairman of the Gleneagles Summit, the July 7 terrorist mayhem actually reaffirmed the hitherto immutable resolve of the summiteers and their global allies in not only drastically meliorating the grind and crunch of poverty, but also to unreservedly bear down on the fast-encroaching culture of terrorism. Thus, attempting to glibly characterize the leaders of the G-8 countries as being pathologically afflicted with weak-will is rather unfortunate, to speak much less of the unpardonably irreverent. For the well-meaning and nimble-witted people of Ghana, no remark, coming at the time it did, could be said to have been more embarrassing. And here, we mince no words in celebrating the fact that Mr. Rawlings is a quondam, rather than the substantive, premier of the Democratic Republic of Ghana (DRG).

And when Mr. Rawlings, rather cynically, adds that “it is impossible to know what the G-8 [Summit] would have produced[,] had the shocking events of July 7 not occurred”(Ghanaweb.com 7/14/05), it is not quite clear just what the founder of the Provisional National Democratic Congress (PNDC) means. In sum, what “impossibility” is there and whose “epistemic temperament” are we talking about? In other words, is Mr. Rawlings trying to second-guess the G-8 leaders or is he simply engaged in intellectual masturbation? Indeed, the keen reader does not have to venture any further in order to uncover the motive behind the preceding observation. The writer himself glaringly lets on such motive in a flagitiously egocentric tenor as follows: “As one of the few African leaders to resuscitate a collapsed economy, I would have preferred unconditional debt cancellation for all sub-Saharan Africa, with a monitoring system to ensure that the released funds go into basic infrastructure, health, education and [the] provision of good drinking water – and not deposited in banks in donor countries”(Ghanaweb.com 7/14/05).

It goes without saying that if, indeed, Mr. Rawlings has any clinical evidence pointing to the opprobrious fact that any African leader – particularly that of his own nation of Ghana – has “deposited [moneys received from the G-8 leaders] in banks in donor countries,” to speak much less of the concerned leader's own personal bank account, let him come out right now and prove his case or be sued by the target of such innuendo and vitriol in a court of law.

Needless to say, the days when Mr. Rawlings' AFRC-PNDC regimes predicated their persecution and summary executions of innocent Ghanaians whom the former dictator routinely designated variously as “enemies of the revolution” and “enemies of the state” are over. The tragedy, however, is that Flt.-Lt. Rawlings and his fanatical disciples do not seem to appreciate the salutary fact that the Rawlings-Tsikata Tribal Reign-Of-Terror is over and done with! And that any brazen and dastardly attempt to take us back along that primitive, Stygian and troglodytic alley would be met with a kind of deadly force the likes of which would, almost certainly, make Baghdad and Kabul seem like a royal vacation in the Bahamas. And, indeed, many of us, including this writer, are willing to lay down our lives to ensure that the Provisional National Democratic Congress does not make the judgmental error of attempting to force itself back into the august Osu Castle.

It is also rather paradoxically absurd for the former Chairman of the AFRC and PNDC to smugly claim that: “The debt-relief debate has, however, engendered the false impression – dangerous for Africa's development[al] prospects – that the G8 concession means more access to more foreign, and free, funds for national development. The reality is that no funds are coming from external sources. Debt cancellation [simply] means the removal of the obligation to transfer financial resources to the creditor,” and then in the very next paragraph mischievously and disingenuously assert that: “I would have preferred unconditional debt cancellation for all sub-Saharan Africa, with a monitoring system to ensure that 'the released funds' [internal quotations added] go into basic infrastructure, health, education and [the] provision of good drinking water – and not deposited in banks in donor countries.”

If one may aptly ask: Just what aspect of the adjective “unconditional” is so difficult for Chairman Rawlings to comprehend? And just what does the NDC high priest understand by the quite limpid expression of “unconditional debt cancellation” for him to also call for the establishment of a “monitoring system to ensure that the released funds [ whose existence he categorically denies, by the way] go into basic infrastructure”?

Furthermore, when the NDC-Mafia capo profusely lauds the World Bank and the IMF, the very exploitative institutions vehemently denounced by such political and intellectual superiors as President Julius Nyerere, late of Tanzania, Dr. Adebayo Adedeji, the renowned Nigerian economist; former President Kenneth Kaunda, of Zambia, and celebrated novelist Chinua Achebe, of Nigeria, just what is Mr. Rawlings thinking and talking about? And, indeed, did the “People-Power” demagogue once consult with his longtime economic mortician – or undertaker – Dr. Kwesi Botchway before sitting down to pen such ideological poppycock?

And for those of our readers who might not have read it, this is exactly what Mr. Rawlings asserts in his rather incoherent article flamboyantly titled “Africa Needs People Power – JJ”(Ghanaweb.com 7/14/05): “Working with the World Bank and IMF, my government halted Ghana's decline; we inherited a near[-]collapsed state and built a 5% growth rate before handing over to the present government. This would not have been possible if I had presided over a corrupt, dictatorial and exploitative government. In other words, true democracy works – you can't go wrong when the people become part of the decision-making process and take equal responsibility for successes and failures.”

And just what “True Democracy” is Mr. Rawlings talking about, since barely two or three months ago, Ghana's longest-ruling former tyrant and “benign dictator” held a press conference in South Africa, of all places, and bitterly lamented the fact that military coup detats were fast becoming a historical relic. The two-term elected pseudo-civilian leader also fails to observe in his article that more cabinet members of his government have been convicted and imprisoned on verifiable and provable charges of corruption than any other government in Ghana's half-century of post-colonial existence.

And when he fatuously gloats over a purported “5% growth rate before handing over to the present government,” the writer, sophomorically banking on the short memories of his countrymen and women, deliberately fails to add that he had reluctantly handed over to President John Agyekum-Kufuor an economy running at a dismal capacity of about 45-percent, with an unemployment rate hovering around the 50-percent mark, and an accumulated debt of some $6 billion, coupled with an inflationary rate of about 20-plus-percent.

Interestingly, the whole point of Mr. Rawlings' article was to take unreserved and singular credit for the G-8's African debt-cancellation initiative. Needless to say, such a brazen claim could not be more scandalous; and, indeed, rather than being an integral part of the solution, Mr. Rawlings has actually contributed to the steady and protracted impoverishment of Ghana in a way that no leader before or after this veritable abomination of a leader could. Which is not to say that we, for our part, had no idea about the undisputed master-brains behind the indubitably auspicious G-8 debt-cancellation initiative – has anyone ever heard of such illustrious names as Paul Boateng – my homeboy – Kofi Annan, Gordon Brown, Tony Blair, Charles Rangel and the Congressional Black Caucus of the United States of America? And how about Nelson Mandela? *Kwame Okoampa-Ahoofe, Jr., Ph.D., teaches English and Journalism at Nassau Community College of the State University of New York, Garden City. He was a regular poet of the Ghana National Cultural Center, Kumasi, from 1979 to 1984, and the author of ten volumes of poetry and prose, all of which are available from Amazon.com, Powells.com, iUniverse.com and Barnes & Noble.com. Views expressed by the author(s) do not necessarily reflect those of GhanaHomePage.