From coffee to toothpaste, Nigerians buy small as hardships bite 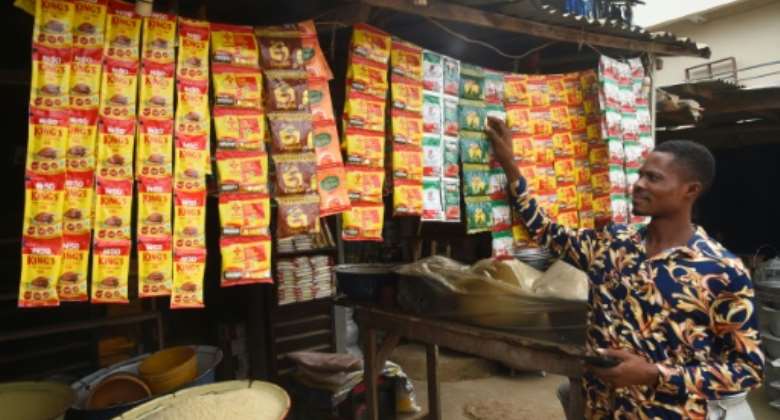 Nigerians struggling to manage high costs of living are turning to smaller packets of products. By PIUS UTOMI EKPEI (AFP)

From five grams of toothpaste to 10 millilitres of cooking oil, many Nigerians struggling with soaring prices now buy their basic necessities in small quantities packed in tiny plastic bags to be consumed on the same day.

Consumer brands behind this "sachetisation of the economy" see it as a creative innovation, allowing consumption for all Nigerians, the majority of whom live on less than $2 a day.

But critics see the development as an economic and ecological aberration, even as Africa's largest economy struggles with the inflationary fallout from Russia's war in Ukraine.

In the streets of Lagos, the vibrant economic capital of Africa's most populous country, small sachets are now part of the decor: they colour its streets, packing the wood and tin shops found on the corner of most streets.

Sitting on a stool, Ibrahim Atahire has been running his small grocery store for 30 years in a busy area of Obalende, a popular district of the megalopolis.

"At my place, you can buy everything in small quantities," said the 55-year-old trader with a streaked grey beard.

On its stand, everything is sold in sachets: coffee or powdered milk for just one cup, a few grams of cereal, toothpaste for one brushing, razors packaged and sold individually, washing powder and fabric softener for a single wash.

Even mosquito cream to relieve bites is sold in a package smaller than the palm of a hand.

For lunch, cooking oil is purchased in sachets, as are spices, tomato sauce, crushed garlic and ginger powder. One sachet, for each ingredient and for each meal.

"I have been selling sachets for several years, but recently people can no longer afford to buy in normal quantities, so that is all I am selling now," Atahire said.

In a parallel street, Sanni Aicha was searching the stalls for the cheapest packet of cooking oil. The mother of two confides that she is "no longer getting by".

"Before I used to get oil in cans, but for two years everything has been so expensive."

Nigeria has been hit hard by the coronavirus pandemic, which pushed up consumer prices in 2021 by 17 percent and forced an additional six million Nigerians into poverty.

It is now suffering the fallout from the war in Ukraine.

In 2022, the World Bank predicts inflation of 15.5 percent and one million more poor people, with the national poverty line calculated at $1.93 at 2011 levels per person per day.

June inflation was 18 percent. In all, the number of poor people in Nigeria is expected to reach 95.1 million -- nearly half of the population -- by the end of this year, the institution said.

Street stalls in Lagos sell small packets of everything from coffee to mosquito cream. By PIUS UTOMI EKPEI (AFP)

"A lot of people that used to be in the middle class are now falling into poverty... People that used to consume those products at a bigger size, but they can't afford those sizes any longer," said Tunde Leye, an economist at SBM Intelligence risk analysts.

"Big brands were losing market because people are unable to buy in big quantity, so they started to sachetise so they could reach that part of the market."

Sachets really hit the Nigerian market in the early 2010s, with brands offering consumers products in reduced quantities to entice them to try new products, says a former marketing manager for a major European brand in Nigeria.

But in 2016, when the country fell into recession after the fall in oil prices, "everybody was buying sachet. So we started to sell every product in sachet," the manager said.

Since then, the economic situation has not improved much, so demand for small packaging has exploded, said one director of a plastics factory in the country.

"Inflation is so high. Sanitary pads are now sold as single units," said the entrepreneur, who spoke on condition of anonymity.

The sun is setting in Obalende, and Aicha is scouring the streets in search of the most competitive price.

"Buying in sachets almost every day costs me more at the end of the month," said the peanut seller.

For cooking oil it is on average 20 percent more expensive, she says.

This is how the poorest end up "spending more" than the others, SBM economist Leye said. All the more so in times of high inflation when the prices of sachets increase almost every day.

Sachets not only colour the stalls of Lagos, they are also found on the ground: scattered on the potholed sidewalks or in the plastic magmas which clog its open sewers and overflow each rainy season.

About a quarter of the waste generated in Lagos is discharged into canals and lagoons and is identified as a major cause of the city's flooding and the spread of waterborne disease, according to a 2017 study.

The poorest who live in precarious housing and flood-prone neighbourhoods are the first to be affected. Moejoh is calling for greater "state control", and for big brands to be held "accountable" for their plastic pollution.