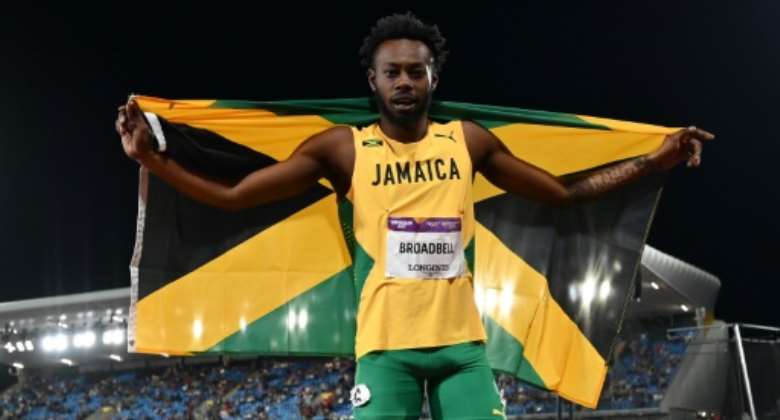 Broadbell, 21, dominated the final from the start to win in 13.08sec, making up for the disappointment of last year, when injury prevented him going to the Tokyo Olympics.

Fellow Jamaican Hansle Parchment, the Olympic champion, had withdrawn earlier in the day due to a niggle just as he had done before last month's world championship final.

"I knew I had to stay focused and that is what I did," said Broadbell. "Sometimes, when you run, you don't know what is going to happen.

"You just have to execute properly. I'm not sure if I clipped any hurdles."

He said Parchment gave him a call to tell him he had withdrawn.

"I'm not sure what the problem was, but he's an Olympic champion, so he knows best."

Broadbell's performance lit up a low-key evening athletics session in Birmingham, which was still a 30,000 sell-out.

Nairn won with a best leap of 8.08 metres, edging out Murali Sreeshankar of India on countback.

"I said in Eugene (at the world championships) that I wanted to come here and get a gold medal," said 26-year-old Nairn. "To say that and do it is great."

Sreeshankar gave India their first medal in the event since Suresh Babu won bronze in 1978.

"It feels good," he said. "This medal has been a long time coming. I have been waiting for a global medal for a very long time, but I kept missing out."

Denny threw a best of 67.26 metres, with England's Lawrence Okoye taking silver a decade after he reached the Olympic final in London before departing to play in the NFL with the San Francisco 49ers.

Grenada's defending decathlon champion Lindon Victor is hanging on to his title by the slenderest of margins heading into Friday's final five events.

"I'm actually ahead of my score from Eugene (world championships where he finished fifth) nine days ago. That is a good sign," he said.

Reflecting the weakness of some of the fields in Birmingham, just 11 athletes competed in the two heats of the women's 400m hurdles -- with eight going through to the final.

The 28-year-old 2018 champion flew to Poland where the next Diamond League meet takes place on Saturday.

Dennis's victory made it a double for Australia after Grace Brown won the women's event.

Thomas's hopes of adding time-trial gold to the road race title he won in 2014 were dashed when he fell early in the ride.

"Sometimes it's bad luck, but today I'll take it on the chin and say it was my fault," said the 2018 Tour de France winner.

On the first night of diving at the Sandwell Aquatics Centre, England's Jack Laugher, who won a gold medal in the 3m synchro at the 2016 Rio Olympics, won the men's one-metre springboard

In the boxing competition, Welsh identical twins Ioan and Garan Croft, 20, are both guaranteed at least bronze medals while brother and sister Aidan and Michaela Walsh are also guaranteed medals for Northern Ireland.