Things That Makes You Go Hmmmm 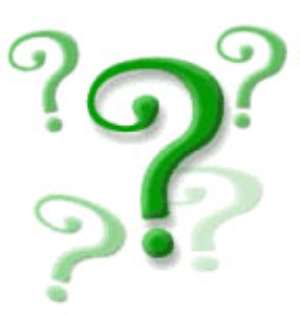 In 1999, before John Agyekum Kufuor became president, his house at the Airport Residential area was never painted and it looked like my uncompleted house. In 2005, it looks like the presidential palace of Sadam Hussein. Hmmmm …. did Kufuor make his private house an official residence in order to use state funds for renovation? The Royal Netherlands Embassy funded the refurbishment under the auspices of the Institute of African Studies (IAS) of the University of Ghana at a cost of 51,000 euros and forms part of the Manhyia Palace Expansion Project Phase One. The great Ashanti Empire is now on it's knees for €51,000? Hmmmmm… Yaa Asantewaa fought in vain Ga Mantse is Dead!!!! REALLY?... The silence of the Gas makes this look like the death of Nii Noi Quartey (a Fisherman in Korle lagoon). Gas should stop blaming Ahantis for pumping up their "king of Ghana" President Kufuor in JamaicaDr. Per Diem has made over 100 trips abroad to places like Mauritius, India, China, Japan, Morocco etc, all with the intention of attracting investors to Ghana. Five years on and the Indians, Chinese, Japanese etc are investing with their feet. It's Tourist trips like this that makes the taxpayer go hmmmmmmmmm In 2001, a “poor unknown farmer” donated 41 million cedis to help renovate "oxford trained, succesful businessman" President Kufuor's private house. In 2004, President Kufuor's son was able to obtain a $3.5 million loan to buy a hotel (so they say). In Ghana, children usually take care of their fathers in old ageHmmm…do the blockheads get my logic? HIPC, Debt-cancellation seeking Ghana has 88 ministers, 230 MPs, 25 members of council of state, 20 Supreme Court Justices. .... Hmmmm…. Talk about bloated and clueless government! "Ghana To Bid For 2032 Olympics?" – What happened to "Ghana To Eliminate Hunger in 2032"? ... Reading this madness, one cannot help but go “Priorities! “ Nigeria's President Olusegun Obasanjo has urged anyone with details of corruption against him or his family to publish them. ....It's a dare like this that makes me go “Over to you JAK” “When the news of the death of Eyadema, and the subsequent installation of his son as President broke out, we were in Kumasi and, therefore, could not rush to take a decision." - Nana Akufo-Addo. .....It's statements like this that make me go “Is Kumasi still in Ghana?” NEWS: President Kufuor has dismissed notions that government ministers unnecessarily enjoy perks that critics say place a burden on the taxpayer and the country's scarce resources… ..... It gladdens my heart to see Kufuor understands why we all either want to be ministers or else leave the country. NEWS: Twenty-five queenmothers and their entourage numbering sixty-four who trooped to the British High Commission last Monday with the hope of collecting their visas to enable them to visit Queen Elizabeth of England found that their applications had been refused. ....Hmmmmmm when will the English queen also visit these so called queenmothers? Miss Ghana Turned Away by Asantehene For Being Late. The headline sounds good until you investigate the number of times Asantehene has been late for functions: Ghana Expo in London and Atlanta are examples. ....It's hypocrisy like this that makes Bush go “Democracy in Syria, but not in Saudi Arabia” Mr. Dan Botwe, Minister of Information, has stated that it was erroneous for any individual or group of persons to assume that the removal of the indemnity clause from the 1992 Constitution was the sole preserve of Government. ..... Why then did NPP lie to Ghanaians that if elected to rule Ghana, they would use their majority in the parliament to abolish the clause? Views expressed by the author(s) do not necessarily reflect those of GhanaHomePage.